New posts - when I have time to update - are below.

This is a Sticky Post, meaning it stays on top for a while (so scroll on down for the newest and latest updates...well, when I can get around to it, that is).


What to do for Christmas?

Well, how about doing something for the Men and Women in the Military?

How about making a donation to Operation Uplink which provides calling cards to our Soldiers so that they can phone home to their loved ones?

AnySolider.com has a great site of what you can to donate to our Service Men and Women.

Consider making a donation to the USO. Click under the heading "How To Help."

Disabled American Veterans is another worthy cause.

And something that costs absolutely nothing but a few moments of your time, but will mean so very much: Operation Dear Abby, Send a Message to Our Troops.

If you have a special organization that you would like mentioned, please add it as a comment.

I got my Holiday card from Speakeress of The House Nanny Pelosi. 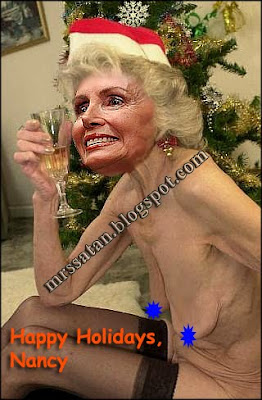 It that time of year again...for 2009. I've been busy working on The Fourth LPOS© Awards. Whew! Just can't seem to get a break. Lots of contenders this year to sort through. Hoo-boy, I tell ya...

If you're not already, you should acquaint yourselves with the term LPOS©.

I don't have to tell you that the MrsSatan Blog Annual LPOS Award is the most talked about, feted, gala affair of the entire blogosphere. That's right. The entire fucking blogosphere, damn it.

Considering NPR's wide and diverse (read "non-white") on-air talent, who will NPR select to replace Carl Kasell? Can you guess who it will be?

Ooooooh....you thought it would be easy until you got to the Wild Card name of Reuben Gonzalez, didn't you? You thought you had it nailed down and picked Kuntlatch, but perhaps she was a red herring? Brew a second pot of coffee, you still have some head-scratching to do. Who will replace Carl Kasell?

Where's ReidTard uttering his famous words, "we've lost," when we need him? We know we've lost in a war when the U.S. commits more Troops to the cause. This is known as Reid's Law: a Military surge of personnel means "we've lost." We sure don't hear Harry bad-mouthing the Military policies of Pbama the same as he did of W. Bush, do we?

One has to wonder if Pbama really wants to win the war in Afghanistan, since his Admin is tying the hands of U.S. Soldiers behind their backs in terms of Rules of Engagement. NPR:

... we were in this combat outpost down in southern Afghanistan, in the Helmand River Valley, and we were inside this center, a command center, watching a video screen. They were watching live while these guys were digging a hole for a roadside bomb. And there were other indicators, too, besides digging the hole. There was a guy swimming across a canal with this wire, and the wires are used to detonate the bomb.

Unidentified Man #1: I have two guys on the west side of the cow buoys(ph) running wires across the canal to the west side, where a (unintelligible) an IED the other day. So, they're watching them right now.

BOWMAN: There were a couple of guys keeping watch and stopping traffic. And the Marines were intercepting a radio call from these suspected insurgents while they were doing these other activities.

MONTAGNE: And on the radio, they were saying we're planting a bomb?

BOWMAN: And on the radio they were talking about planting a bomb.

MONTAGNE: So from the Marines perspective, the Afghans really did appear to be insurgents. So what did they do?

BOWMAN: Well, they felt comfortable. They had all the indicators that these guys were insurgents planting a bomb. So they thought about using a machine gun to shoot these guys. There was another combat outpost not too far away. The problem was there was a compound of houses between where the Marines were with their machine gun and the guys planting the bomb.

So then they decided to bring in the helicopters and use the machines guns and the helicopters to shoot these guys. As the helicopters came in, these guys look up in the air and start walking away. One of the guys was carrying a yellow jug - and that's become the icon of the roadside bomb. They mix fertilizer and diesel fuel in this, and that becomes a part of the bomb. And then we saw one of these guys throw this jug into a haystack.

Unidentified Man #2: And hiding the jug into the hay pile right now, and then are walking near the open field, so just wait until�

BOWMAN: And they were gone. It was all over. They could no longer shoot at them.

MONTAGNE: So why didn't they shoot at them?

BOWMAN: Well, they thought that they were still too close to this compound of houses to allow these helicopters to use their machine guns to shoot, so they decided against it.

MONTAGNE: So, in being very, very careful about shooting at what they absolutely believed to be insurgents, they ended up, in effect, losing these guys. How did that make them feel?

BOWMAN: Well, they weren't happy at all. And some of them stormed out of this command center. And we talked with one of them afterwards. This is Lieutenant James Wendy(ph).

Lieutenant JAMES WENDY (U.S. Marines): There's no way that anyone other than the enemy would've been injured.

BOWMAN: So, why weren't you allowed to shoot?

Lt. WENDY: Honestly, I don't know. I'd like to say I wish we could play by the big boy rules, you know, but, you know, it's just the way it is. And if I had known how frustrating it'd be and was able to better prepare myself for that mentally, I think that maybe I would've been better off.

MONTAGNE: What about the military leaders? Is it reaching the top? Are they hearing these complaints about these rules of engagement that are so restrictive?

BOWMAN: You know, they are hearing these complaints. And I had a few minutes this week with their overall commander, General McChrystal, and I told him the same story, Renee, I told you. And I asked him about the rules of engagement. Here's what he had to say:

General STANLEY MCCHRYSTAL (U.S. Commander, Afghanistan): I've been at this a long time now, since 9/11, and there were a tremendous number of times when I've seen activities done, which, on the surface of what was seen, looks exactly one way, looks completely convincing. And then in the aftermath, what you saw was incomplete. In fact, what we find is civilian casualties who are unarmed civilians.

I think when we err on the side of maturity and caution, there is a cost. And I know that we're asking an extraordinary amount from them to operate with such restraint and self-discipline, but I think it's how we win the war. 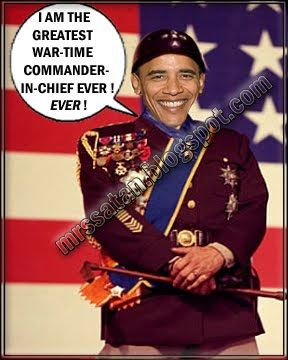 No one really knows what Pbama wants to do in Afghanistan. He's set no benchmarks, other than a withdraw date that is about as permanent as Nanny Pelosi's botox. From the hardly Right of Center Slate:

Since his inauguration, Barack Obama has tripled the number of troops fighting in Afghanistan. After announcing the latest surge of 30,000 new soldiers in a speech at West Point, it is clear that he is a president actively prosecuting a war, not merely tending to one that was left to him.

According to his speech, Obama is escalating while retreating, adding more troops while also setting a date for their departure. Obama said he was putting pressure on the Afghan government, but he didn't suggest how. Some of the blurring was by design. He smudged the border between Afghanistan and Pakistan, explaining that while he was sending troops to Afghanistan, the struggle was now more regional than it was when the war started eight years ago.

The president's critics will complain about the 18-month deadline Obama set for starting the troop withdrawal. The president says he set a deadline to focus the minds of our partners in Afghanistan, but he also said the departure decision would be based on the recommendations of his field commanders. This is a version of the debate we had during the presidential campaign, when Obama set a 16-month deadline for withdrawal from Iraq. His advisers will no doubt admit—as they did during the campaign—that if military advisers say a withdrawal from Afghanistan in 18 months is inadvisable, then the troops won't leave. His Republican critics will also presumably agree, as John McCain did during the campaign, that if the commanders say it's OK to start leaving in 18 months, then that's just fine with them.

Obama insisted that his deadline-that-isn't-a-deadline would put pressure on the Afghan government. "The absence of a time frame for transition would deny us any sense of urgency in working with the Afghan government. It must be clear that Afghans will have to take responsibility for their security and that America has no interest in fighting an endless war in Afghanistan."

But Obama said nothing in the speech that put actual pressure on the government.

Obama's tone was methodical and emotionless. He often sounded like a reluctant warrior. He told the West Point students about signing condolence letters and greeting coffins arriving at Dover. "As your commander in chief, I owe you a mission that is clearly defined, and worthy of your service," said Obama. There were repeated references in the speech to the honor of their service.

The president said twice that he didn't take his decision "lightly." This seemed like an obvious shot at Dick Cheney and other critics who had complained that he had taken too long to make his final decision. (On the day of the speech, the former vice president claimed that Obama had shown "weakness.") Obama also spent considerable time reminding his audience about the troubled history of the Afghan war since the attacks of 9/11, implying that if Bush and Cheney had taken a little more time during the first seven years of the war, there would be no need for him to be giving the speech—or sending more troops into danger. 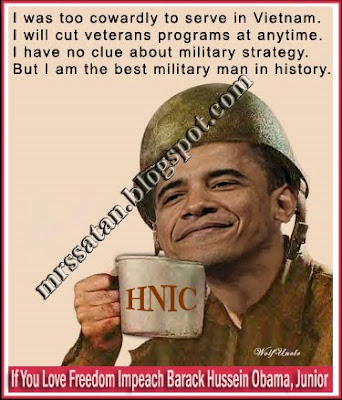 Why...I remember a time where The Left jumped all over W. Bush whenever he mentioned the words, "nine-eleven." But Barry received The Coveted Free Mass from his Kool-Aid injecting Cult Followers.

Is Barry a Warmonger? Is he a pansy Pacifist? Is he a Wussy-Widdle Kenyan whose loyalty to the United States is virtually nonexistent? Is he a Marxist, set out to destroy America at the string-pulling expense of his puppet masters? Why, yes, he is. He's all these things. And more. He's what you call, a versatile.