Mary Landrieu Is For Sale 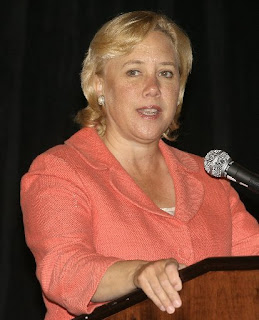 Chubby LiberNazi U.S. Marxist Senator Mary Landrieu of Louisiana is for sale. Her price for voting to support the Rationed and Socialized healthcare program known as ObamaCare is one-million dollars...and then some. APee:

Section 2006 takes up only a few dozen lines in a sweeping health care bill that runs to 2,074 pages and mentions neither Sen. Mary Landrieu nor her state of Louisiana. But the section's purpose is indisputable: to deliver $100 million or more in federal funds to the state. And in the process clear the way for one of three moderate Democratic fence-sitters — Ben Nelson of Nebraska and Blanche Lincoln of Arkansas are the others — to help propel the legislation past its initial hurdle in a crucial Saturday vote.

I bet $100 million or more in federal funds buy a lot of Twinkies and bon-bons for the Moon-Pie-Faced Landrieu.

"You're being mean, David."

Comments:
Typical for a Louisiana politician. She's nothing but a whore!

I think David Duke (R-LA) would have done a better job if he had been elected.

Yeah, she is a whore, no doubt.

R. Duncan, heh....Duke. Libs used to call me that in my comments section. Like they thought they were REALLY CLEVER when they called me that. They think they are so *witty* and that I never heard that before. ;-)

Oh...Modesto and R. Duncan...The Marxists are fast-tracking us straight to hell.