[White House senior advisers] said Friday they were not alarmed by Geithner's rough treatment at the hands of Republican lawmakers on the Joint Economic Committee, which even included a call for him to resign.

Oh...wait...it's the WaPoo! Did I say neutral and objective? I must have one-too-may hits of The Chronic.

Awwwww. Po' Widdle Timmy Tim Tim The Tax Cheater. He was asked some tough questions, gosh darn it, about the Obama Admin and the Treasury Department's profligate spending of billions and trillions of taxpayer money! How dare anyone hold responsible, let alone accountable, the likes of Timmy Tim Tim The Tax Cheater and his boss Dear Leader His Excellency Barack Hussein Obama, Junior.

There were plenty of Democrats who grilled Timmy Tim Tim The Tax Cheater just as harshly and roughly as did the Republican lawmakers. Anyone who followed Geithner's Grilling knows many Dem lawmakers were not impressed by Geither's performance and showed nothing but incredulity and "even" rough treatment towards Geithner's ignorance, arrogance and inexperience. He's in way over his head. If he were a human, physical representation of a mortgage, he'd be underwater.

Brwady Dennith didn't mention this in his story because - well, my guess is - the WaPoo is far too busy fellating Hussein Obama, Junior and his Crooked Communist Cronies. 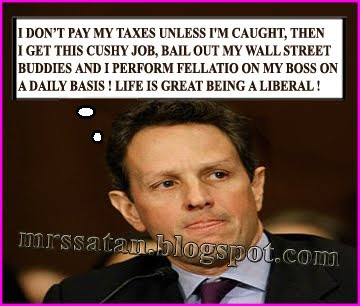 Licking those chapped lips, eh Timmy? Do they taste like Kenyan anus?
Eleven paragraphs into the story, Brwady finally gets around to noting that Geithner used taxpayer bailout money to pay AIG's creditors at full face value! Had this happened under any Republican Admin, this fact would have been placed near the beginning of the story and would have likely been the screaming headline, something like: "Bush Treas Sec Bails Out Wall Street Cronies at Full Value!"

And it isn't until the twelfth paragraph that Brwady mentions that one House Democrat said "no" when asked during a television interview whether Geithner should keep his job.

Geither is a Wall Street Good Old Boy. He'd be vilified, demonized and forced to resign if he were a part of any Republican Administration. But he has the approval of The Kenyan behind him along with the Liberal press, including the WaPoo, which is far too busy fellating the Pbama Admin and swallowing like the good little guzzlers that they are.

I wonder if the WaPoo keeps a stomach pump on its premises for their reporters, just in case they swallow too much...well, you know.

Labels: Geithner, It's The Economy Stupid, Marxism, Pbama And His Fascist Pigs, Pbama Must Fail, The Market

HEY DD.. It has been depressing as shit lately. Like a damned dictatorship.
Tim Tim lol.. lol..

And what was Tity Baby Timmy doing the last 8 years? Securing as much stolen money as he could for his crooked Goldman butt buddies. Incarcerate the Tity Baby along with his brain dead overlord Obutthead. Let them spend the next 30 years felating each in the Super Max.

Thank you, McNorman. I agree, one would have thought that the Libs would have stopped whining and throwing hissy fits after having their majority Congress and the White House. Now we know they are incapable of not whining, pissing and moaning, and, in general, being the whiny-ass titty babies we knew all along that they are.

Uf...if Bush had picked Geithner, The Left would have still been projectile shooting blood from their collective anus. But whatever Fraudy does is just fine with his Cultists. It's fucking insanity.

I agree, it has been depressing.

Thanks for the LOL! Best to you and yours. Luv ya!

I am a not a hardliner.

I am a satiric essayist.