Bowing Obama or, How Barry Learned to Stop Wincing and Take it Up The Ass 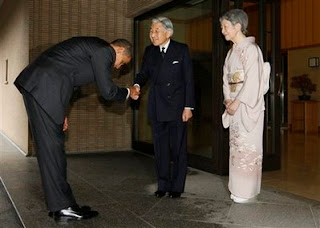 (UPDATES: 12:22 p.m. A brief news video has been added below, showing the greeting in this photograph. Contrary to some claims, the video shows no reciprocal bow by the emperor, who traditionally bows to no one. And we've added a file photo from 2007 of Vice President Dick Cheney greeting the Japanese Emperor in the same door way in a different fashion.)

I'm guessing it's Barry's habit to bow. He's getting ready to be anally penetrated. He's used to taking it up the arse from his boyfriend, the secretive Mike Signator. Who knows...maybe even spBarney spFrank has had his dingle-dangle up the Kenyan's bi-racial bunghole. 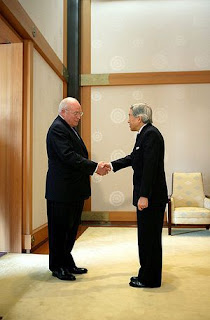 America bows to no one, except when we have a Cowardly, Marxist, Pacifying, Appeasing Cokcsucker in the White House.

We all remember Pbama's submissive bow to the Saudi King:

Gay Barry. Flaming Barry. Barry likes having his butt up in the air waiting for penetrating incoming projectiles. Come out of the closet, Barry. There is no shame in your being gay. A sham, yes, a sham of everything you claim to be but aren't. Sham yes; shame no.

Comments:
Fraudy is a well trained submissive bitch. His dark lord Soros will have it no other way.

I want to send a message to all the acorn, welfare babies, and union people who can read. The zoo called.....you all are due back at 6.

Flaming Barry likes to bow down, doesn't he?

Let's give him the health care industry, and see to whom he will bow down then. Maybe to Soros? Oh wait. He does that already.

I wonder if Bagdhad Gibbs will deny that Flaming Barry bowed down.

I feeel sorry for Gibbs. He has to lie contantly to save Flaming Barry's derriere.

Yep. Barry is a well-trained submissive Gimp Bitch. Soros is his Sugar Daddy and Gimp Master, no doubt about it.

Thank you for announcing that all LefTards are due back at the zoo. I'm not sure they all heard the announcement!

Tell me about the Keys. What's the econ situation there like? I'm looking to move to a warmer climate and have always found the Keys intriguing. I know the cost of living must be high there. Give me some details, if you can spare a few moments. Thanks.

Yeah, The Kenyan sure doesn't show the same respect to Americans who disagree with his politics or politicians who aren't on the Obama Bandwagon. He refuses to meet with Republican leaders, yet bends over and grabs his ankles for everyone else. He should be an embarrassment to everyone on earth who values freedom.

Yeah, Obammy loves it...in the can.

Heh, yeah Groovy, in the "can" indeed.

Submission to Islamo-fascism and to communist dictatures is the worst sin a president oculd have right now.

Unfortunately for us, Pbama got it all.

Sorry about my last message, I missed that article, great one indeed.

No prob about the comment about missing the post on the bow, Tym. There will not be a written test. ;-)