TIME magazine reports a USA Today/Gallup Poll that shows 64% approve of the job the president is doing so far in office, down from a pre-Inauguration high of 83%.

This USA/MacPaper Gallup Poll echoes the Daily Mail poll which reported approval ratings for Pbama dropping from 83 to 68 percent after only one week in office!

I can't wait until his poll approval ratings hit the mid-20s, and you know they will. You know it. Oh, that's going to be such a fun time for those of us who aren't Kool-Aid drinking Pbama Cultists! 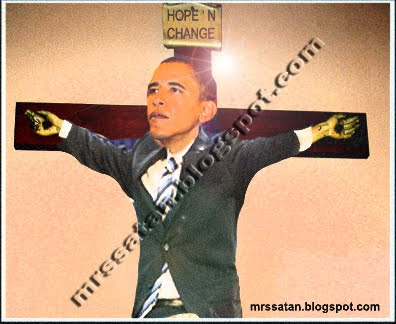 The Messiah is hoping for change that his approval ratings don't continue dropping.
©2009

Comments:
Ah... poor Obama... what will he do if no one adores him?

I've had some visitors lately not too happy with some posts... funny though how more people seem to agree.

David, Speaking about Oba's popularity and my tongue in cheek prediction on this site that the media and rappers would turn on him, it has begun.

I've met this guy. Can't say I really liked him personally but he is kind of saying the same thing Alex Jones is.

Bug, he'll always have his hardcore groupies. They'll be his "skinheads."

Slow and sluggish i-net connectivity today. Will ck out the vid later.