Above Figures from Yahoo Finance.

Stocks logged their worst performance since a 5.3% loss on Jan. 20 as investors dumped stocks after Treasury Secretary Geithner failed to deliver the specifics that investors sought from Treasury's financial rescue plan.

I would like to point out and remind everyone that January 20 was The Inaugural of Hope and Change which, on its own, was a disappointing day on Wall Street.

On Tuesday, February 10, Treasury Secretary Timmy "The Tax Cheat" Geithner spoke at 11AM, supposedly to publicize and announce more details on the stimulus.

He spoke at 11AM, and what happened is that at approximately 11:15 and 11:30 AM, the Dow Jones Industrial Average (DJIA) reacted by tanking. And it tanked more until the close. 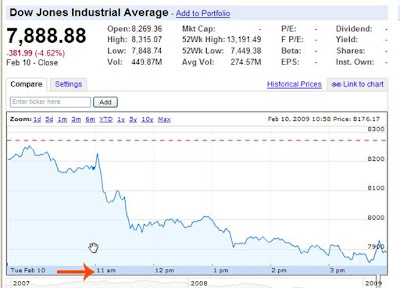 Geithner did admit that the Pbama Stimu-pork bill is risky.

Other reactions to Geithner's Tuesday speech tracked at The New York Times:

“Mr. Geithner left major questions unanswered about the workings of many components of the new plan, and officials acknowledged that they had yet to decide many of the thorniest issues.”

"If the Treasury Secretary is not 100 percent confident in his own plan, how could investors be?"

And there is Herr Biden, who - speaking about the stimu-pork - freely and openly admits, "If we do everything right, if we do it with absolute certainty, there's still a 30 percent chance we're going to get it wrong."

Insanity: Defined as doing the same thing over and over expecting difference results each time.

Pbamanomics...bringing us a little bit closer to Marxism every day!

Comments:
yeah, I blogged this today...and added that the Bush tax cuts will be expiring within the next couple of years. The public has short memories and when that payroll check gets hit for a hundred bucks in taxes they may decide to dump the dim-a-crits in congress next time..and if congress doesn't do something the taxes will hit close to election...

And we know whatever Dems say, double it. If they say something will cost $100 figure on $200.

So figure on Biden, instead of being 30 percent certain of failure, is more like 60 percent sure of failure of the stimulus. That makes us feel better, right?