Schumer Errs On IndyMac;
Blames Others

Amazing. Simply amazing. Another textbook case of how Democrats respond to failure:

And it isn't - and should not, never be - surprising that they exhibit the above behavior, no, that's not the surprise. It's that they do it so shamelessly, so smugly, so self-righteously and in this case, as arrogantly and sanctimoniously as only Cluck Schumer can. 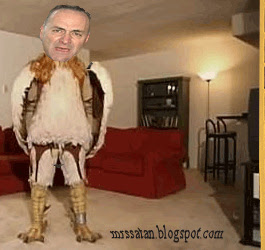 Cluck Schumer Click here and New York's famous U.S. Senator will answer your questions.
Cluck helped along the seizure of IndyMac by U.S. regulators after a run by depositors left the California mortgage lender short on cash. Bloomberg:

The regulator blamed U.S. Senator Charles Schumer for creating a ``liquidity crisis'' after a letter on June 26, in which he expressed concern that the bank may fail. [Why, I wonder what Cluck expected to happen? - Drake]

IndyMac came under fire last month from Schumer, the Democrat from New York, who said lax lending standards and deposits purchased from third parties left it on the brink of failure. During the 11 business days after Schumer explained his concerns in a June 26 letter, depositors withdrew more than $1.3 billion, the OTS said. [In other words, Cluck caused a run on the bank. What an asshat. - Drake]

Schumer blamed IndyMac's own actions and regulatory failures for the bank's seizure.

"If OTS had done its job as regulator and not let IndyMac's poor and loose lending practices continue, we wouldn't be where we are today,'' Schumer, a New York Democrat, said in an e-mail yesterday. "Instead of pointing false fingers of blame, OTS should start doing its job to prevent future IndyMacs." 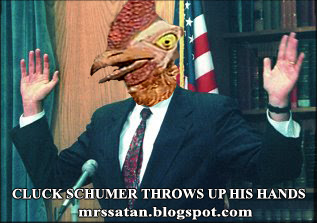 Oh, Clucky, do you ever - have you ever - removed your self-appointed halo? Even once, for that poor hair plug job you have going on in front?

Of course what happened to IndyMac isn't Cluck's fault. Nothing is his fault. He belongs to the political party of Saints, Martyrs and those that long ago attained a state of perfection in all they say and do. It is not and cannot ever be possible in his world that he could have made an error, a mistake, or spoken or written anything that could harm or even slightly negatively impact the outcome of another entity because on his side he has The Three Cardinal And Unbreakable Laws of Being a Democrat:

Whatever it takes, eh Clucky? Why, you barely spent any time on items number 1 and 2; you just touched on them before leaping directly to number 3. That takes chutzpah! The kind only a Dem, nee, a Liberal/Progressive like you can get away with!

With what Dems like Clucky do to the financial sector of the market I can hardly wait to see what a great job they will do with socialized healthcare!

Comments:
Yes, politicians tend lately not to accept their responsibilities: often they just blame others. In the States, at least you have the "recall". Here there is nothing as such. You vote each X years and during that period you're not interesting at all.

BFW - and Schumer is one of the finest examples of passing the blame to others. Politicians everywhere can learn from him in how to avoid personal responsibility and blaming others. Thanks for commenting.

Way to go Cluck! You are a hero to no one but yourself.

Yeah, if a Repub Sen or Rep wrote a letter creating a run on a lendor, the Left would be screaming blood for that Repubs resignation. Where is the outrage? I mean, other than us? ;-)

A great place to share you Indymac story. We have people all over the country sharing their experience with Indymac Federal bank.

New York Times reported that hedge fund managers have a new champion in their effort to keep legally dodging the taxes the rest of us pay: none other than New York Senator Charles Schumer. Now you know who is Schumer's friend and why he caused the bank run on Indymac. He truly support hedge fund and private equity because they truly support him.

"Large Investor decided to pay a few bucks to a Senator in New York to force the issue."(Prospect Mortgage Backed By Sterling Fund--Private Equity Acquired The Mortgage Branches from Indymac before FDIC takeover)
http://www.housingwire.com/2008/07/03/regulators-to-schumer-weve-got-a-whole-bag-of-shhh-with-your-name-on-it/

"And do remember that there are many investment bankers located in New York, making them pretty influential constituents of Sen. Schumer."
http://www.pasadenastarnews.com/opinions/ci_9783402

Thanks for the info and links netguru.