Ted Kennedy has been diagnosed with a malignant and inoperable brain tumor.

While I do not and would not "wish" anything bad upon anyone - (well, maybe with the exception of Liberal Radio Hater The Rapidly Decaying Corpse of Mike Malloy, for no other reason than he wishes ill upon those he dislikes, thus treating Malloy as he treats others is simply using and applying his own standard back onto him) - for me to say I have any sympathy for Ted Kennedy would be fake and phony.

This is the man who left a woman to die - perhaps one of the most horrible deaths one can imagine - by drowning. Some professional investigators say that Mary Jo Kopechne may have been alive, trapped in the upturned car, for up to four hours, staying alive by breathing from an ever-diminishing air pocket until water filled the car cavity and she inhaled her final breath.

You want me to exhibit sympathy for someone who left a woman to die? You want me to show restraint toward the person who could have done so much more to rescue Miss Kopechne? Not a fat chance, not the slightest, most remote fattest chance. Ted did virtually nothing to help a completely innocent woman who was dying and did everything to postpone her rescue.

Kennedy and his advisers didn't report the overturned car - with Kopechne's lifeless body in it - to the police until the next morning! Ted left the scene of the crime, returning to his hotel room getting a good night's sleep! Oh, he did manage to call the hotel desk and complain of loud noise from a party. Meanwhile, while he was in his comfortable hotel room, Miss Kopechne's lifeless body was trapped in a watery death. Oh yeah, Ted cares so much for people - doesn't he?

The inquest into Kopechne's death was conducted in secret. The District Attorney did not pursue manslaughter charges against Kennedy despite that the judge hearing the case stated that negligent driving contributed to the death of Miss Kopechne.

All the above is true. Think I'm making up the story about the circumstance surrounding Miss Kopechne's horrific death? Guess again.

The story is HERE, complete with footnoted references. Go read it. 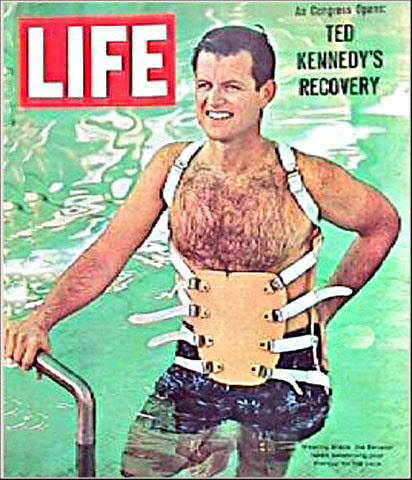 Please - don't anyone expect me to show any sympathy for this unindicted manslaughter who paid no price in the justice system for his inaction and grossly inappropriate behavior in his negligence in leaving Miss Kopechne to die.

I have no love or even a degree of impartiality for the Kennedy family, except for Ted's poor late sister Rosemary, forced to undergo a lobotomy by her father Joe. The Kennedy's are a pox on the body politic of America. Had they been Republicans instead of politically correct Democrats, holding elected political office would have been a pipe dream. Only Democrats could get away with electing the likes of Ted Kennedy.

I shouldn't have to, but I will remind everyone of the Democrat's celebrating the deaths of Ronald Reagan, Richard Nixon, Gerald Ford, and Rev. Jerry Falwell. I'm simply adhering to the same standard the Democrats use when it comes to the illness or death of those they consider their political enemy. For simply being a Republican, The Left had a field day back-slapping themselves and celebrating the recent death of the great Charlton Heston.

Don't expect me to feign compassion for Fat Ted, the man who allowed a woman to drown to death.

The bottom section of this post contains all the documents hatred from many on The Left who have more than celebrated the death of Republicans.

Comments:
Don't whip out the party hats yet, the teddy beast could always go the way of his sister with that lobotomy. They might just stumble upon the tumor, and it's not like his sense of judgement would suffer much.

How would we know if Ted had a lobotomy? The only way would if there were a visible scar.

I think the tumor would be a better senator, too.

I still say he ran out of gin and I'm sticking to it. Did I just hear Teddy's doctor calling for a Jager bomb stat?

How could a tumor survive all the alcohol? It must have been there all along, which could explain why he's a Marxist.

Molson - God bless 'ya. That line of "running out of gin" cracks me up!

Shaved Ape...Kid Donnie Long - holy sh*t, it's been a long time since I've heard from you! Glad to see you are still with us, dude!

Really, how could a tumor survive all those years of 80 proof? Maybe the tumor is the result of all the boozing?!?!?

That is a GREAT site!!

I think they should look into the case more. We have more modern technology now and nothing adds up. How did he get out but she didnt? why did he leave her there? and who goes to a cocktail party and doesn't drink? nothing makes sense!

I agree Shawn. Sorry for the delay in publishing your comment. I agree. A whole new trial should be arraigned and Ted put on trial.

Idiots. Yep, it looks like he screwed up big time and had his butt saved simply because he was a Kennedy - but the rest of the vitriol on this page is unfounded.
he was popular across both parties because he was such an effective, intelligent and intuitive politician.

He was one of the few in the US Govt. system that kept the rest of the world thinking the US still had hope of turning itself around and joining us in the 21st century.

His loss is a great loss to you all. Even those of you who hate him - if you had the balls or brains to look into his legislative career should thank him as your lives (yes, YOUR lives) would be far worse off without his efforts.

And finally, (since most Conservatives are - or call themselves - Christians) it's just really, REALLY childish and poor form to speak ill of the dead.

You should all pray on this and ask for forgiveness.

PS:Remember - Jesus was a socailist! :-)

Well Matt, I'm agnostic, thank you very much, so I can't reply to the references you made about religion.

His loss was no loss to me. I'm pleased as punch the fat pig is no longer on the earth.

Everyone knows if he and the rest of his inbred klan of Kennedys had been Republicans, their political aspirations would have come to an abrupt end.

Why do you Liberals love criminals so much? Why do you hate America so much?

I'm sure you're on record on all the liberal blogs condemning them for the way they spoke ill of the dead about Tony Snow, Ronald Reagan and Gerald Ford, right? Leave another comment and links to all the sites you condemned your fellow libs for the way they celebrated the deaths of Republicans. I'm guessing you wont reply to that because you didn't condemn them, did you.

I'm glad Ted is Dead. May he be rotting in the hottest flames in Hell for eternity. If there is one. See, I'm not sure about it because I'm agnostic. But I sure hope there is, cuz that's where Ted deserves to be. He'll be at home with his brothers, his dad, Hitler and all the other Fascist pigs there.