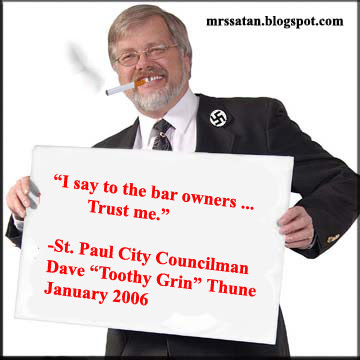 Master Asshat Extraordinaire, Dave "Toothy Grin" Thune
The City of St. Paul is thinking it would be a good business decision to allow bars in St. Paul and those within a 10 mile radius of the city, to stay open for business serving alcohol until 4AM while the Republican Convention is in town.

Bars are already hurting under the onerous statewide No-Smoking law, so allowing them to stay open for an additional two hours seems like a good idea for them to make a few extra dollars while a major convention is in town, right?

Here's what "Toothy Grin" Thune had to say about allowing bars to stay open for two hours longer. MPR:

"Remember whose ward this is going to end up in -- it's mine. And I've got 8,000 people living downtown who don't want a bunch of puking Republican lobbyists on the streets at 4 in the morning."

Well "Toothy Grin Asshat", I don't know about the puking part of it, but it's your fellow Democrats that, in the past, have been the ones drunk and arrested for DWI:

and former Democrat Duluth Mayor Herb "Don't Call The Cops On Me" Bergson.

Let's look again at "Toothy Grin's" statement: "Remember whose ward this is going to end up in -- it's mine."

What a petulant little Stalinist. Typical, typical Liberal. "It's MY ward." No, it isn't your Ward, Toothy. It is the Peoples' Ward - you simply represent them. This pot-bellied minor politician's arrogance knows no bounds. His mental maturity is worse than that of a child smack in the middle of the "Terrible Twos" syndrome. How in good Christ's name they re-elect him to office is one of the great mysteries of our time.

I don't live in St. Paul, so Toothy's little temper tantrums don't affect me or my life. I'm far beyond and removed from the fallout of Toothy's Hitleresque political tactics so GFY. Criticizing him and poking fun at him is one of the benefits of blogging. Whenever he opens his mouth and speaks, fatuous material comes puking out and is tailor made for blog fodder. He is a textbook microcosm example of everything that is wrong with politics. 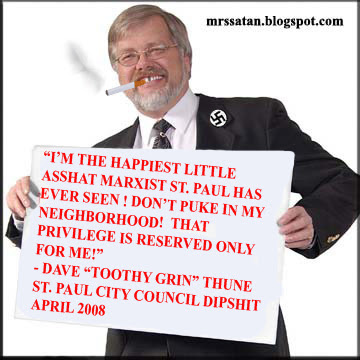 Dave "Toothy Grin" Thune - doing everything in his power
to close businesses and turn St. Paul back into a ghost town.
©2008

Comments:
I know Dave Thune. Hes a nice guy trying to do the best for the city.

Hows the property tax rate in St. Paul these days for homeowners?

Well, ya gets whats yas pays for.

Hope it's worth it!

Thanks for commenting. You have my sincere sympathies.

Note to Modesto: your comment was nowhere to be found. Sorry. Maybe a submission glitchy on your part?

You made the point. Dave Thune is a dipshit. He wouldn't know what's good for St. Paul, even if it bit him in the ass.

Hey Modesto. Thune is a Socialist. He's twice (and I documented it, you can find it in the posts by clicking on the LABEL Thune) called St. Paul Kommissar's tax hikes "courageous."

Thanks for giving us the real view of Thune from a St. Paul citizen.