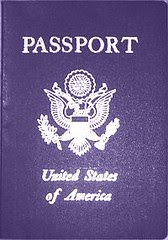 The Obama Passport Faux Security Breach Conspiracy
Remember the outcry from the Liberals when Hussein Obama's Passport security was breached? Then, we found out the firm also breached Passport security of Senators John McCain and Hillary Clinton?

Maybe this this is a CONSPIRACY put into play by Obamaniacs themselves to make it look like it was done by his opponents. I wouldn't put anything past Obama operatives. What better way to cover one's conspiracy tracks than to include your own passport in the snooping breach?

Well, it turns out that THE COMPANY WHOSE EMPLOYEE BREACHED THE PASSPORT SECURITY IS RUN BY AN OBAMA SUPPORTER AND WHO IS AN ADVISER TO OBAMA!

The CEO of a company whose employee is accused of improperly looking at the passport files of presidential candidates is a consultant to the Barack Obama campaign, a source said Saturday.

John O. Brennan, president and CEO of the Analysis Corp., advises the Illinois Democrat on foreign policy and intelligence issues, the source said.

Brennan briefed the media on behalf of the campaign this month.

The executive is a former senior CIA official and former interim director of the National Counterterrorism Center.

He contributed $2,300 to the Obama campaign in January.

Let me recap. The CEO of the company that breached McCain's, Clinton's and Obama's passport security IS A SUPPORTER AND ADVISER TO OBAMA!

Oh, if the situation were reversed and the CEO were a supporter and adviser to McCain, the Left would be out of control with rage, anger and accusations that would take on a brand new "low", something the likes of which we've never seen.

Oh, if the situation were reversed and the CEO were a supporter and adviser to McCain, the Left would have spittle flying out of their mouth calling for heads to roll and for resignations.

Come on Lefties - put on your Big Boy Pants and apply the same standard to yourselves, your Party and Hussein Obama.

So much for any Liberal Conspiracy Theories that it was the evil Bush-Vader Administration that was poking around passport security!

Man, you "chocolaty" or however the hell you speel that when talking about Obama, that's racist!

Two Dogs - I think I have the spelling right on chocolaty. I forget he's half white. Saying or writing "Mulatto, nougaty, creamy, caramel rich!" just doesn't sound as good.