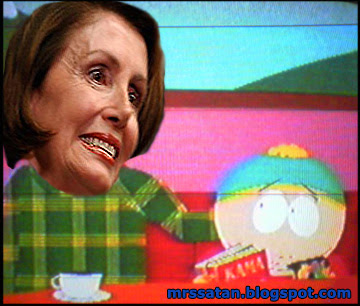 "I have some Cheesy Poofs hidden between my thighs for you, young man.
How would you like to be my personal Congressional Page Boy?"

Nanny Pelosi, Speakeress of the U.S. House of Representatives has a page scandal on her hands. Those Dems cannot keep their greasy and oily paws off "the children", can they?


The below info on Pelosi's Page Sex Scandal is from the Washington Post, and as I often say, that would be not FOX News for you LiberNazis out there:

House teenage pages are so wild and unsupervised that two GOP members of Congress have resigned from the House Page Board, protesting that they were not informed of two pages caught shoplifting and two others busted for engaging in public oral sex.

One of the members who resigned, Rep. Ginny Brown-Waite of Florida, tells the Sleuth that she felt "very, very uncomfortable" both as a mother and a grandmother continuing to serve on a board she feels is inadequately supervised.

One of the incidents that bothered Brown-Waite involved what she called "inappropriate sexual indiscretions" between two teenaged pages. She would not elaborate, though she said other pages served as "enablers." A source familiar with the incident - which resulted in the expulsions of two pages - said one female page performed oral sex on a male page in the page dorm room as the other teenagers watched. "The enablers provided cover for them, the other pages were watching," the source said.

According to Brown-Waite, the alleged public sexual indiscretions were "not an isolated incident."

Two other pages were expelled for shoplifting. Brown-Waite and another source said one of the shoplifters was charged with a felony.

In a letter to House Speaker Nancy Pelosi (Calif.) , Brown-Waite suggested that the Clerk of the House, whose job it is to oversee the House page program, should no longer be in charge of the teenagers. "Page supervision, other than on the floor of the House, is found to be sorely lacking, and the clerk has been slow to share information with members of the board," Brown-Waite wrote. "In at least one vitally important incident, we were intentionally kept in the dark about dismissals for more than a week, and were only given the details after personally confronting the clerk with rumors we had heard."

Both Brown-Waite and Rep. Shelly Moore Capito (R-W.Va.), who also resigned from the page board in protest, said they blamed Pelosi for not reforming the program as promised. Capito said the "problems with communication between board members that plagued the program in the past have only continued under new House leadership." Capito plans to officially tender her resignation on Friday.

The congresswoman was referring to the political dustup during the Foley scandal when then-House Speaker Dennis Hastert (R-Ill.) was accused of a cover-up. His staff was reprimanded later by a review panel for failing to communicate information to Democrats on the board about Foley's sexually explicit electronic messages with pages. The Foley scandal was the last straw in a string of scandals that cost Republicans the majority in 2006.

Brown-Waite said she resigned knowing that "in the short term, the credibility of the board will be damaged, and the page program may suffer."

UPDATE: Rep. Dale Kildee (D-Mich.), the chairman of the bipartisan House Page Board, weighed in Thursday night. He expressed regret over the resignations of Reps. Capito and Brown-Waite from the board and suggested he agreed, at least in part, with the congresswomen that members of the board should have been notified sooner by the House clerk of the pages' misconduct.

The House is Pelosi's domain. Remember how she said that "it will take a woman to clean up the house,"? Apparently, Nanny Pelosi hasn't been too busy cleaning.

What did Pelosi know and when did she know it? Is she involved in a cover-up? Fair is fair, isn't it - if Hastert was accused of covering up, we indeed can level the same accusation at Nanny Pelosi.

The charges that pages are 'out of control' and 'wild' have no basis in any facts: kids do stuff like this all the time. But the comparisons to what happened when people like Mark Foley [that 'Democrat'] was caught actively trolling the House Page Pool for young boys minors to have sex with has been made. It's already burned into the narrative by these clowns. And my outrage is that not one challenge to this smear is in evidence in any news article, anywhere.

Yes , uh - shpilk - Foley was a Democrat before he switched parties, which means it is entirely likely and probable that his attraction to men was ingrained in him while he was a Liberal.

Mark Foley - as I have written over and over - was never, ever convicted of any improper physical relationship with anyone...at all. Yes, his e-mails and instant messages were deplorable and no doubt conduct unbecoming of any politician. Oh, and by the way, the page that Foley was e-mailing and IM'ing was 18 years old, not - as Liberal trot out and lie again and again - 16 years old. Some 13-14 months after the Foley story no one - no news organizations, no blogger - can produce one shred of evidence that Foley had any improper physical relationship with anyone or any page that was under the legal age limit.

And "kids do stuff like this all the time"? - Well, maybe the children of Dems and Libs behave like this because they see their parents do it all the time. That good, marriage-vow observing Ted Kennedy and his good Catholic brothers John and Robert who'd hump anything that had a pulse and a vagina, while married, of course. Dennis Kookcinich is on his third marriage. Jim Bob BobbyJim Webb is on his second or third marriage. And we all know what the word "fidelity" and vows of marriage mean to Dems like Bill Clinton. And San Fran Mayor Gavin Newsome. All, good God-fearing, vows-of-marriage practicing Democrats, right?

Pelosi said that "The House enforces a zero tolerance policy for page misconduct." Well, maybe her schedule was booked for botox injections and crow's feet dermabrasion so she simply was unable to enforce the zero tolerance policy, thus, the result is this latest Page Sex Scandal...you know, the one that happened on her watch.

Pelosi is in charge of the House. If she can't enforce what she is supposed to enforcing, she should resign. But you're not going to hear any Dems call for her resignation. I bet if she were a Republican we'd hear the Dems shrill cries for her resignation. What a bunch of hypocrites the Dems and Libs are - they prove their hypocrisy time and time again.

And let's not forget the worst little Democrat ever, a man who was steeped into Democrat beliefs, proud to be a Democrat, devoting huge amounts of time to Democrat fundraising, Democrat parades and he was praised - PRAISED by fellow Democrats as a precinct captain.

JOHN WAYNE GACY WAS A DEMOCRAT. Don't believe me? Click on the link, read the story. Gacy, who tortured, raped and murdered at least 33 young boys - many under the age of 18 - was a Democrat.

So enamored of Gacy were the Democrats, that then-First Lady Rosalynn Carter posed for a photo with him in 1978; a picture taken by the Official Photographer of the White House: 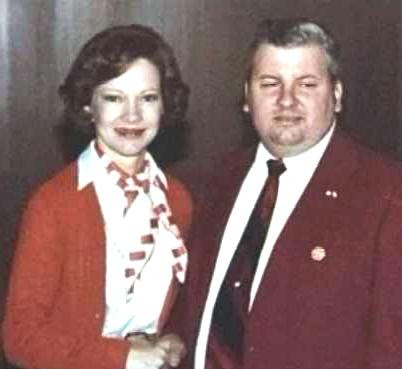 
And we have South Dakota State Senator Dan Sutton, A Democrat who fancies molesting and groping boys.

And we have other Democrats who can't keep their hands off children such as:

Mel Reynolds, Democrat - sexual relationship with a 16-year-old girl/minor who is one of his campaign workers.

And Liberal Democrat Charles Rust-Tierney who was the former head of the Virginia chapter of the ACLU who pleaded guilty in an Alexandria, U.S. District Court to child pornography charges.

Rust-Tierney enjoyed 850 pornographic images of children as young as four years-old. Police also discovered a six-minute video which depicted small children being sexually brutalized set to music by the band Nine Inch Nails. One video in his collection is a recording of the brutal forcible gang rape of three prepubescent Tibetan girls, who could be seen to weep in the videos while restrained with ropes. Investigators claim Rust-Tierney had video showing, among other things, the sexual torture of infants and toddlers.

And the Dems have their Senator from Virginia JimBob BobbyJim JimboBob Webb who likes to write stories about child pornography.

And former Democrat Governor of New Jersey Jim McGreevey cruised truck stops and bath houses for sex with men - all the while married with children. I imagine he'd return home from a truck stop and kiss his wife and children. Quite the Democrat Family Man that McGreevey was!

But all the above sick and twisted perverts pale compared to the acts of Democrat John Wayne Gacy. He is the face of modern Democrat-Liberal Family Values.

Don't ever - EVER - let the Dems and Libs forget that Gacy is one of them.

Comments:
Wow. The Demoturds lying again. Shocker. It took absolutely no time for the Demoturds to turn the House into their own personal merde maison. Now that has to be some kind of record.

"Maybe it will take a woman to clean up the house."