"I don't feel no ways tired. I come too far from where I started from. Nobody told me that the road would be easy." - Hillary Clinton's Selma, Alabama speech - March 2007.

Nobody told her the road would be easy!

Poor Hillary Clinton. Not long ago she played the Female Card. AFP:

"If you hear someone saying that America can't elect a woman president ... tell them to come with me," [Hillary] Clinton told a service employees union here in September, saying she hears parents point to her and tell their young daughters 'see, honey, you can do whatever you want to do in life.'"

Sure kiddies, turn a blind eye to your husband's infidelities and, why, you too can grow up to be the wife of the Arkansas Governor...maybe even a carpet-bagging Senator from New York. Hint: saying that "you've always been a Yankees fan," will score you some voters!

Choose your metaphor -- "blood in the water," "crack in the armor," "fault lines" -- this fight is already beyond even the vaunted Clinton spin machine's ability to contain it.

Per The New York Times' Adam Nagourney, Clinton, D-N.Y., has to contend with a "damaging line of criticism: That she, taking advantage of her dominant position in some polls, is not being candid about her views and about would she would do as president." 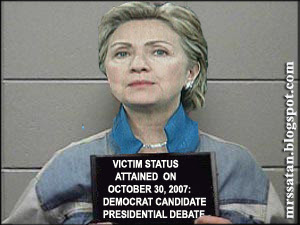 Suddenly the smartest woman in the world - ever - is being "victimized" not by those big, bad, evil Republican presidential candidates, but by her fellow Democrats who are all men! Big, brutish, misogynistic, thuggish men.

R.J. (beware of people who go by their initials!) Eskow, writing at the HuffPooPo says he doesn't think that Tim Russert acted any differently in his questions or approach to Hillary than he would have acted towards any male candidate:

I don't know how Tim Russert feels about women. He may be a terrible sexist. But given his political bias over the last 10 years, it's more likely that he went after Clinton because she's a Democrat -- and the front-runner -- than he did because she's a woman. Did her gender add another tone to Russert's attacks? Could be. Does Clinton have special challenges (like the offensive "shrillness" trope and the vulgar "cleavage" stories) because she's a woman? Yes.

I wonder how long it will take the Insane Liberal Clown Posse to label the liberal Eskow a "Right Wing Tool"?

The nuance noticed by Eskow about Russert - and Eskow is correct, Russert attacked Clinton as a candidate, not because of her gender - eludes someone using the name Alegre (Algae?) posting over at DailyKooKs, who writes:

I never expected to see the moderator go after her in such a vicious and unbalanced manner. He’s supposed to be a journalist for cryin’ out loud – a fair & balanced moderator in this event so that the viewers (that’s us) could get a good look at our candidates and make up our mind as to who to back in the upcoming primaries and caucuses next year.

Apparently, Tim Russert ("Tim") didn’t get the memo as to what his role was supposed to be last night because of all the people in that auditorium - he did the bulk of the attacking. Don’t get me wrong here – Tim definitely had some help...

Russert asked the panel of 7 candidates a total of fifty-two questions. How many do you figure were about Hillary?

Right – of the 52 questions a total of twenty-five were about Hillary.

Of those 25, how many do you think were hostile toward Hillary?

Right – 22 of those questions were hostile.

Edwards & Obama had a lot of help last night in their attacks on Hillary. Tim, and even [Brian] Williams (to an extent) made it a foursome.

Cue the audio of the crying baby and label it Algae. Algae likes using the words "hostile" and "hostility" - could you guess?

Yeah - shame on Russert, Obama and The Sissy - they should refrain from asking tough questions to any Democrat candidates - lob them only soft ball questions - and reserve their "hostility" only for Republican candidates, right Algae? Poor Algae, who is obviously a well-trained, lap dog Liberal Apologist.

Continuing to demonstrate that it is the Democrat Party that is the Big Tent party of love, fairness and compassion - the party that "talks to the enemy and opponents" - a Hillary supporter calls for "Tim Russert to be shot." National Review:

Another highlight from that conference call with Hillary strategist Mark Penn:

One caller from Oklahoma City said that “the questions … were designed to incite a brawl,” and that Russert’s and Brian Williams’s moderating was “an abdication of journalistic responsibility.”

Another said Russert “should be shot,” before quickly adding that she shouldn’t say that on a conference call.

Penn and Mantz said they were hearing a lot of the same sentiment from other supporters, but they do not plan to engage the media or the debate’s moderators.

“We’re not challenging the media on that, but the sentiment you’ve expressed is obviously one I’ve heard” Penn said. 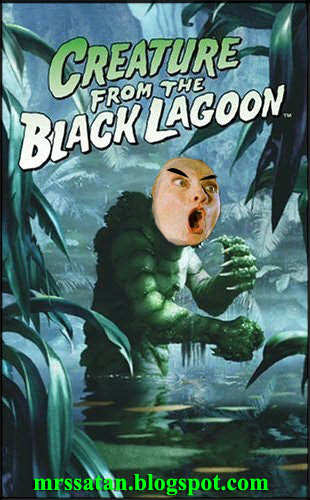 "In so many ways, this all-women's college prepared me to compete in the all-boys club of presidential politics," she said Thursday to cries of support.

Even Liberal Talker Fat Ed Schultz, during most of his Thursday program, ripped Hillary for playing the victim.

The Clinton Express is taking her failed performance in Tuesday night's debate seriously, very seriously. From The Hill:

Mark Penn, Clinton’s senior strategist and pollster, and Jonathan Mantz, the campaign’s finance director, told the supporters on the call, which The Hill listened to in its entirety, that they expect attacks from Clinton’s rivals to continue, and she will need the financial resources to deflect their attacks.

Clinton came under withering assault in the Philadelphia debate, and some supporters on the call agreed with analysts that she stumbled.

...a follow-up breakfast Thursday morning with campaign chairman and former chairman of the Democratic National Committee (DNC) Terry McAuliffe, was apparently to stop whatever bleeding the senator might have sustained during a debate.

Wat's the matter, MrsSatan? Are you finding that "It Takes A Village Effort To Be A Candidate" rather than simply being crowned the Ruler of America?

Well, "Nobody told you that the road would be easy."

Comments:
I wonder how she would hold up to the type of criticism that W has received for eight long years? Will the FNC hurt her little feelings and make her cry or will she just shut down the FNC Chavez style? Will she have Bubba incarcerated if he shags another intern in the Oval Office? Will Bubba even bother to wear pants? Will the Breck Boy declare his undying love for another man? Possibly Osama? Enquiring minds want to know. The rest of us just want a cold beer.

The "smartest woman in the world" never knew what all of knew in 1992, namely that Bubba couldn't keep Little Willy in his outhouse? Yeah, she's "smart"!

Agree Molson, she would move to shut down all types of critical media, the Chavez style you mention. I am in complete agreement with you on that.

She'll do what most women do when they are criticized; she will throw objects at her critics if she can (kinda like the dishes and ash trays she flug at Bubba in the White House). Then she will cry while eating several boxes of Dove chocolates or a gallon of ice cream.

Hi Jonathan! Amazing how the smartest woman in the world is so easily fooled by men like her husband and "W", huh? Why, men just fool her at every turn.

"Little Willy in his outhouse."