Here's the brief bio on Madsen from Wikipedia:

Wayne Madsen is a Washington, D.C.-based investigative journalist, author, and syndicated columnist. His articles have appeared in The Village Voice and Wired.

Madsen was a Senior Fellow of the Electronic Privacy Information Center. He was a communications security analyst with the National Security Agency in the 1980s, and an intelligence officer in the US Navy. He has testified on numerous occasions before the US Congress.

Wayne Madsen edits the Wayne Madsen Report which he describes as following in the tradition of Drew Pearson's and Jack Anderson's famous "Washington Merry-Go-Round" syndicated column and columns by I.F. Stone.

Wow, whomever wrote that for Wiki is sure overreaching and redefining the term "investigative journalist."

Madsen is the Tin Foil Hat Wearing non compos mentis who, since at least prior to the November, 2004 U.S. presidential election, has been saying and writing that a Bush-Cheney pre-emptive strike against Iran is "imminent". Imminent? Imminent?! Apparently Wayne, the "investigative journalist", doesn't fully grasp the meaning of the word imminent.

Madsen's alarmist and so far false writings are from where other Tin Foil Hat Wearing Truthers - like Jowly Jim Ward - get their conspiratorial nourishment.


The blog Simply Jews described Madsen as an "an overweight chipmunk doing his best to contain and suppress a humongous flatus. "

Me? I think he looks like a big, fat, blubbering walrus. Sorry walruses of the world, no offense intended: 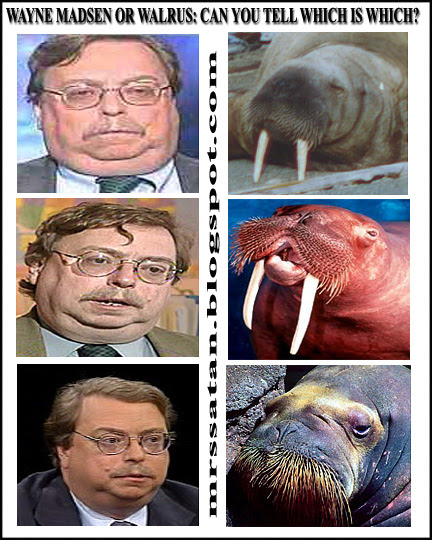 Comments:
He needs another chin. Lardass.

(with apologies to John Lennon.)

KM: He is the Walrus allright!