John Edwards: King Of The Spenders 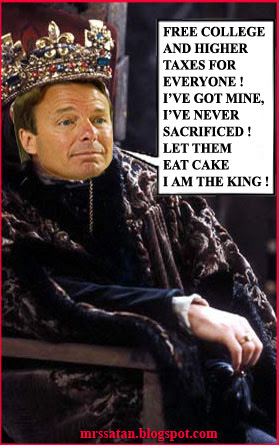 King John
Hold onto your wallets if John Edwards wins the White House, folks. Little chance he will, but still...what he proposes is scary - way more scary than Halloween.

The Concord Monitor reports the following:

John Edwards says if he's elected president, he'll institute a New Deal-like suite of programs to fight poverty and stem growing wealth disparity. To do it, he said, he'll ask many Americans to make sacrifices, like paying higher taxes.

"It is central to what I want to do as president to do something about economic inequality. I do not believe it is okay for the United States of America to have 37 million people living in poverty," he said in a meeting with Monitor reporters and editors this week. "And I think we need, desperately need, a president who will say that to America and call on Americans to show their character."

At every stop, Edwards said, he tells voters he'll ask them to sacrifice.

"I think if we want to fund the things that I think are important to share in prosperity, then people who have done well in this country, including me, have more of a responsibility to give back," he said. Later, he added: "There are no free meals."

"Senator Clinton has over the years has taken millions of dollars from lobbyists and defends the status quo system," he said. "She just basically says the system works and her argument is, 'I'm experienced, I can operate within the system.' "

Clinton spokeswoman Kathleen Strand questioned the line Edwards has drawn. He takes money from state lobbyists and from a variety of industry groups; according to a Washington Post roundup, he's taken more than $8 million this year from lawyers and law firms, including some that also employ lobbyists.

Here's what it boils down to; Edwards got his, screw everybody else.

For Edwards to claim he's not in the pocket of Big Law lobbyists is just another lie from the Sissy who spent his life suing companies so that he could live with a silver spoon in his mouth.

Edwards has the law lobbyists funding him. He's raised roughly $9.3 million from attorneys, who made up about 55 percent of individuals who listed their occupation on finance reports.

This is the man who want you to forsake your SUV, but he gets to keep his.

This is the man who, when asked who is his moral leader could barely think on his feet to come up with an answer. He did...after stammering for 12 seconds.

This is the man who said he is uncomfortable around "gay people."

This is the man who sends his cancer stricken wife out to fight his battles for him.

This is the man who worked for a sub-prime lender to "learn about poverty."

This is the man who said he didn't know if Cuba's heath care system is a "government-run system."

This is the man who sent his cancer-stricken wife out to fight the MoveOn morons.

This is the man who was old enough to serve in Vietnam...but didn't, who wants to implement mandatory military service.

This is the man with a 28,000 square foot home and a multi-million dollar beach home.

This is the man who asks, "What would Jesus say," about our own self-indulgence while Edwards is one of the most self-indulgent people around.

You know, John, if you'd like to sacrifice a few hundred-thousand, or a few million dollars of your "guilt" money to me, I'd be only too happy to accept it.

What's next for King John? Oh, I suppose he will follow in the footsteps of Hugo Chavez and nationalize all the various industries, corporations and broadcasting companies in America.

Yes John, there are two Americas, your rich, silver spoon world and the rest of us trying to make a living. And you want to take it away from those of us who haven't attained your level of wealth.

Stalin would be proud of the Sissy, wouldn't he?

hey if he cuts mt taxes and makes gates pay more, i am jake with that. i just do not want to see the surplus a democrat would bring spent on hair care products for him.

Molson - Stalin would have confiscated all Edwards money and property first! heh

oh Rev - ya gotta get off the "soak the rich" bandwagon. It doens't work.
Clinton tried that during his tenure, and it failed.

DD you got the confiscation part right. That would be a given. Whether the shooting would happen before or after said confiscation would only be a matter of circumstance. BB has grand delusions of confiscation, but he is too much of a pussy to really pull it off. Hillary on the other hand has no delusions. She will be confiscating with both hands and the IRS, and the FBI, and the... She will even make some shit up. Come to think of it, BB doesn't sound so bad when compared to Hillary.

Edwards is a Sissy!