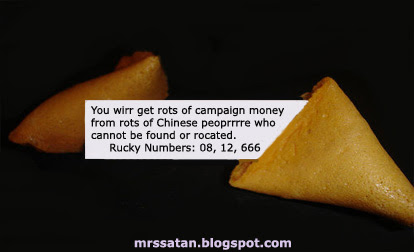 Hirrrrrarrrrry's Recent Fortune Cookie Message
MrsSatan is raking in campaign cash from such wealthy and affluent sectors of society such as dishwashers, waiters and street vendors in the Chinatown community.

[Hillary Clinton's] unparalleled fundraising success relies largely on the least-affluent residents of New York's Chinatown -- some of whom can't be tracked down.

Dishwashers, waiters and others whose jobs and dilapidated home addresses seem to make them unpromising targets for political fundraisers are pouring $1,000 and $2,000 contributions into Clinton's campaign treasury. In April, a single fundraiser in an area long known for its gritty urban poverty yielded a whopping $380,000.

At this point in the presidential campaign cycle, Clinton has raised more money than any candidate in history. Those dishwashers, waiters and street stall hawkers are part of the reason.

The Times examined the cases of more than 150 donors who provided checks to Clinton after fundraising events geared to the Chinese community. One-third of those donors could not be found using property, telephone or business records. Most have not registered to vote, according to public records.

And several dozen were described in financial reports as holding jobs -- including dishwasher, server or chef -- that would normally make it difficult to donate amounts ranging from $500 to the legal maximum of $2,300 per election.

Of 74 residents of New York's Chinatown, Flushing, the Bronx or Brooklyn that The Times called or visited, only 24 could be reached for comment.

The tenement at 44 Henry St. was listed in Clinton's campaign reports as the home of Shu Fang Li, who reportedly gave $1,000.

In a recent visit, a man, apparently drunk, was asleep near the entrance to the neighboring beauty parlor, the Nice Hair Salon.

A tenant living in the apartment listed as Li's address said through a translator that she had not heard of him, although she had lived there for the last 10 years.

A man named Liang Zheng was listed as having contributed $1,000. The address given was a large apartment building on East 194th Street in the Bronx, but no one by that name could be located there.

Census figures for 2000 show the median family income for the area was less than $21,000. About 45% of the population was living below the poverty line, more than double the city average.

In the busy heart of East Broadway, beneath the Manhattan Bridge, is a building that is listed as the home of Sang Cheung Lee, also reported to have given $1,000. Trash was piled in the dimly lighted entrance hall. Neighbors said they knew of no one with Lee's name there; they knocked on one another's doors in a futile effort to find him.

Salespeople at a store on Canal Street were similarly baffled when asked about Shih Kan Chang, listed as working there and having given $1,000. The store sells purses, jewelry and novelty Buddha statues. Employees said they had not heard of Chang.

Another listed donor, Yi Min Liu, said he did not make the $1,000 contribution in April that was reported in his name. He said he attended a banquet for Clinton but did not give her money.

Clinton "has done a lot for the Chinese community," he said.

One New York man who said he enthusiastically donated $2,500 to Clinton doesn't appear to be eligible to do so under federal election law. He said he came to the United States from China about two years ago and didn't have a green card.

Qun Wu, a 37-year-old waiter at a Chinese restaurant in Flushing, saw a reference to a Clinton fundraiser in a Chinese-language newspaper. He took a day off from work to go. Though he only makes $500 a week, he considers his $1,000 donation to be money well-spent. He got his picture taken with Clinton, hung it prominently in his house, then had color reprints made and sent to family in China.

It's amazing how the Clintons tap into such huge reservoirs of questionable campaign money from the hardworking and low-income Chinese community. None of us have to be reminded of the dubious flow of Chinese cash that Bubba Clinton raised and received during his two terms in the White House.

If any other candidate - especially a Republican - was receiving campaign contributions like those of Hillary Clinton reported by the L.A. Times, without a doubt Cluck Schumer would be front and center of cameras and microphones calling for "an investigation." But, as usual, if your last name is Clinton, you get a Free Pass from scrutiny and large scale reporting by the usual MSM outlets.

Let's just put away the pomp and circumstance of the 2008 presidential election and crown MrsSatan as the Queen - the King? - for eight years and get it over with. I wrote several months ago I've already reconciled myself and accepted the fact that she will rule us for two terms. By 2013, our monetary standard will be the Yen. 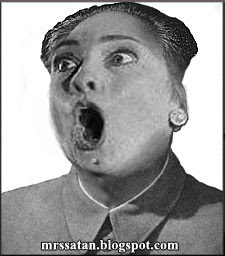 Comments:
Hillary only steals because it's for the children. She said so in her book 'It Takes a Whole Village to Steal for the Children'. Now the most evil and vile Repubs, they only steal for Cheney. Bwaahahahahaha. Evil. Spawn of Reagan. Boogey. Boogey. Boogey. Oh you get the point.

Were you on another another hiking trip?

I only wish. I did go for a walk in the woods today. The Fall colors are much better this year than last. I took a bunch of photos and I'm pretty happy with the results. The Canon A80 doesn't always do too well in the woods. Focus problems usually and the view finder is too small for manual. Too bad I can't post them on 'Hiking CO' since it would have to qualify as 'Hiking MI'. I don't want to polute the gene pool. Guess I need that second blog for all things not 'Hiking CO'. I did try posting some panoramas on 'Hiking CO', but I am not satisfied with the results. Blogger shrinks them down so much that they lose their impact and I do love the panos.

Hey. I love Hill's new Mao look. That really works well for her and her ideology. But look out kids. Hill's one kiddie policy might not work out so well for you if you don't measure up to your sibling. Ha.

I thought the panoramas - or at least the large sized images (after clicking on the small sized ones) looked really good.

Leaves are all changing here in the Twin Cities too.

Thanks for liking the Mao look. She will rule us just like him.

I hope they send her a box of "Kung Pao Meow" along with all that cash.

KM - I do it all for my regular readers, like you.