For the second day in a row people have witnessed strange eating habits around the world. Yesterday we read about the report of the pelican eating a pigeon.

Today, families and tourists in New York's Central Park were left shocked when Michael Moore picked up and swallowed a pelican that was swallowing a pigeon that was nibbling at the remains of a White Castle Cheeseburger.

The unusual wildlife spectacle in New York's most recognized park was caught on camera by photographer Kathal NacMaughton.

He said the White, Euro-Centric Moore had the pelican in his beak while at the same time the pelican had the pigeon in its beak. Meanwhile, the pigeon was eating part of a discarded cheeseburger.

Mr NacMaughton, from the Press Association, said: "Moore was on the towpath preening itself, and there were a lot of tourists watching it.

"Then Moore got up and strolled along until it reached one of the pelicans, which it just grabbed in its beak.

"There was a bit of a struggle for about 20 minutes, with all these people watching. Moore only opened his mouth a couple of times.


"It was kicking and flapping the whole way down," said NacMaughton, adding, "so was the pigeon. And the cheeseburger didn't look too happy about it either."

"Then he managed to get the pelican, the pigeon and the cheeseburger to go head first down its throat."

Moore then released a huge burp according to NacMaughton, saying, "he then began to look at other pelicans like what he'd just consumed wasn't enough." 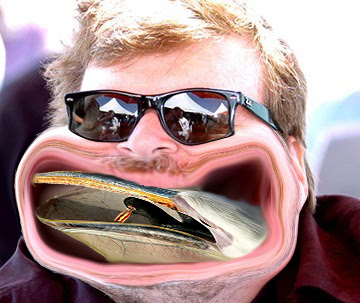 Taking a lesson learned by nature, Moore remarked, "I don't know why I didn't think of eating like this before. Hey - you don't have any mint jelly on you, do you?"

Who is michael moore?

You know...that guy who likes cheese.