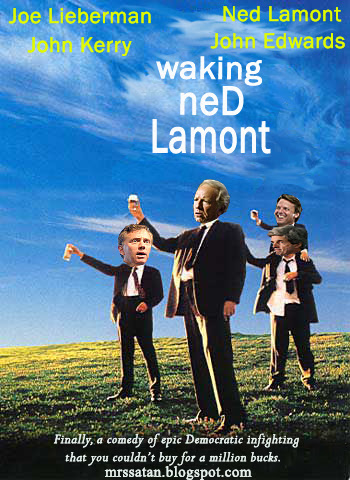 Ned Devine lives in a small village in Ireland and he wins the lottery. For those who have not seen it, "Waking Ned Devine" is a fantastic movie, one that I can watch repeatedly again and again. And I don't want to give anything away, but Ned wins the lottery. But that's a small part of the story of the movie.

Ned Lamont is in some ways similar to Ned Devine. But unlike Devine, Lamont was born into a family of wealth and riches. Normally the Left calls people like Ned Lamont someone who was born with a silver spoon in their mouth because I'm pretty sure that's what the Left said about George W. Bush:

Lamont is the great-grandson of former J.P. Morgan & Co. Chairman Thomas W. Lamont, and has an inherited net worth estimated between $90 million and $300 million.

Where Ned Devine won the lottery, Ned Lamont won life's lottery, inheriting $90-$300 million! Good for him, and I mean that.

From Lamont's own campaign site:

As a child, Ned's family dinners were animated by political discussions, with lively exchanges between his grandfather, a banker, and his uncle, a Democratic activist. But the underlying theme was public service.

The Elitist's scorn Lieberman's audacity to depart with the Liberal Politburo Platform, mostly due to Lieberman supporting the Iraq war. So the liberal elite has turned their allegiance to Ned Lamont, waking up his name recognition with his frequent appearance on The Majority Report with co-host Sham Cedar.

Some basic background information on Lamont from Wikipedia:

Edward M. "Ned" Lamont was born in 1952. He is a businessman from Greenwich, CT. He will face U.S. Senator Joe Lieberman in a primary challenge on August 8 in the 2006 election.

[Lamont], graduating from Phillips Exeter Academy in 1972, Lamont earned a bachelor's degree from Harvard University in 1976 and an M.P.P.M. from what is now the Yale School of Management in 1980.

He then entered the cable television industry, managing the startup of Cablevision's operation in Fairfield County, Connecticut. Four years later, Lamont founded, and is currently president and chairman of, Lamont Digital Systems, a builder and operator of advanced telecommunications networks for college campuses and residential gated communities, with over 150,000 subscribers. The company's finances are private, though it currently has 35 employees, down from 100 in 2001.

Before running for the U.S. Senate, Lamont held local office in the suburb of Greenwich, Connecticut. Lamont unsuccessfully ran for a state Senate seat in 1990, finishing in third place.

Lamont is the great-grandson of former J.P. Morgan & Co. Chairman Thomas W. Lamont, and has an inherited net worth estimated between $90 million and $300 million. His father, Ted, was an economist who worked with the Marshall Plan which helped reconstruct Europe after World War II. He later served in the Nixon administration in Housing and Urban Development. Ted Lamont is now an unaffiliated voter, having last voted for a Republican in 1988. He has told The Hartford Courant that "Eastern Moderates no longer have a place in the GOP."

What happened in 2001, why the lay-offs and downsizing? Has that changed for the better since five years ago?

What does Ned stand for, where does he differ with Lieberman?

Well, according to Ned's own campaign site:

Ned is running because he loves his country and is deeply concerned about its current direction. Like most Connecticut Democrats, and most Americans, he is tired of being represented by a senator who is not willing to stand up to the President on the war and on the rest of his wrong headed judicial, fiscal, and environmental policies.

While much of his frustration is rooted in his opposition to Bushs' war in Iraq, Ned believes the problems with the Bush administration cut across many issues. The war, however, fuels the problems at home by diverting critical resources and attention. Ned supports proposals by Congressman Murtha and Lawrence Korb for phasing out of America's front-line involvement in Iraq.

Oh, he's a cut-and-runner! Well, THAT certainly makes him different from Lieberman now, doesn't it. The Defeatist and Pacifist Crowd that finds Lieberman's support of the war so...so...loathsome, so vile, so repugnant and so rapacious, - why the Left just can't support one of their own who stray from the Pacifist Platform. So they toss Lieberman overboard without a lifejacket and sidle up to Lamont. Who needs Republican opponents when you have friends such as those who used to support you and now don't?

Tomorrow: Waking Ned Lamont, Part 2: What Else Does Lamont Stand For And How Are The Lieberman Supporters Being Treated