The New Board Game That's Sweeping The Country: AIRHEAD AMERICAOPOLY™©

AIRHEAD AMERICAOPOLY™© IS ENDORSED BY THE FOLLOWING INDIVIDUALS!

Click the > Button to hear what they have to say about AirHead Americaopoly
™©:

Get To Know The Characters of The Board: 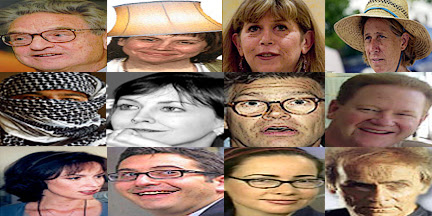 The Object of The Game is Twofold:
1) As the host of an AirHead America program, try to stay on the air despite dismal ratings and losing affiliates.
2) Try to avoid, at all costs, visiting The Rapidly Aging and Decaying Corpse of Mike Malloy in The Dead Zone.

Players roll the dice and move their token to the corresponding place on the board.

EIFFEL TOWER: Players landing of the Eiffel Tower move directly to France and get to live next to Johnny Depp.

CACKLIN' LAMPSHADE: Players landing on Cacklin' Lampshade must consume significant amounts of alcohol, enough to motivate player to drunkenly drive their car and side-swipe another car while attempting to avoid police by committing a 'hit-and-run'. A Minimum .21 Blood Alcohol Content is REQUIRED. Laughing in a Cackling Manner is required for the rest of the game by any player landing on this square.

RANDI RHODES: Players landing on Randi Rhodes must talk with a thick, Brooklyn accent for the duration of the game and avoid being truthful about anything.

CRYBABY CORNER: The Liberal's 'DREAM SQUARE'! Any player landing on either of the two CRYBABY CORNERS can whine and cry about any issue or topic for the rest of the game. Crying and whining does not have to be confined to only game issues. Other players must listen and sympathize with player who is crying and whining.

TERRORIST SQUARE: Players landing on the Terrorist square must be sympathetic to the plight of the terrorist (as if we had to tell you this). Try Negotiating with the Terrorist for a better dice roll next time.

STEPHANIE "McSlut" MILLER: Pretend you are funny, laugh at your own jokes. Have sycophantic crew that forces laughter at your unfunny comments as well.

CASH CORNER: Players landing on Cash Corner get a free pass at never having to visit The Dead Zone.

RATINGS PLUNGE / AFFILIATES DIE: Uh-Oh! Your AirHead America program ratings have plunged to digits well below the approval ratings of President Bush AND you've lost affiliate networks carrying your show! This would be the time to play a LIES, LIES, LIES card, if you have it, denying that your ratings are crashing and affiliates are abandoning you.

BIG FAT EDDY SCHULTZ: Players landing on this square are REQUIRED to shoot their dog dead. No other options are available. If player doesn't own a dog, one will be provided.

KATHY (Mrs. Malloy): Players landing on this square must empathize and show compassion to Kathy for having married such a decrepit, old, corpse like her husband.

SHAM CEDAR : Players landing on this square must have knowledge of non-existent laws and regulations that exist only in Sham's tiny brain. Make up rules for the game that don't exist and insist all players abide by said, made-up rules.

JANENENEANANENANENNNE GARAFOOLIO: Players "landing" on Garafoolio may feel the urge to projectile vomit. Force yourself to tell her "she's pretty" and try to move on as soon as possible.

THE DEAD ZONE: Players landing in The Dead Zone have effectively lost the game. Players could return to play if they can raise the dead, limp and rotting corpse of Mike Malloy back to life, but to date, this has proven impossible. If you are the first to do this, please let us know and we will change this rule of the game.

Players landing in The Dead Zone will be summoned straight to Hell by Mike Malloy, where this bitter, aging and rotting corpse resides in Cocytus, The Deepest Level of Hell. There is no hope for any player to return to regular game play once having landed at The Dead Zone.

CARDS: Cards can be played at anytime while player is taking his or her turn in the game.

Examples:
1) Lie about how many spaces another player moved his or her token and convince others that accused player is cheating.
2) Escape The Dead Zone: Card allows player to save themselves from having to move token To The Dead Zone
3) "AirHead America ratings are improving, we're gaining audiences all over the nation!"
4) "Nothing on Fox News can be trusted."

SOROS BANK CARDS - Soros Bank Cards entitle player holding card(s) to a vast reserve of cash and assets from Sugar Daddy George Soros to use strategically in the game.

Examples:
1) Force players to listen to your AirHead America program, whether they want to or not, via the Fairness Doctrine.
2) Cash Infusion into Liberal Causes that are nothing more than Socialist ploys
3) "Poppies for everyone!"
4) Money buys power, power used to manipulate other players.

Winner is the player that has avoided The Dead Zone and Mike Malloy. 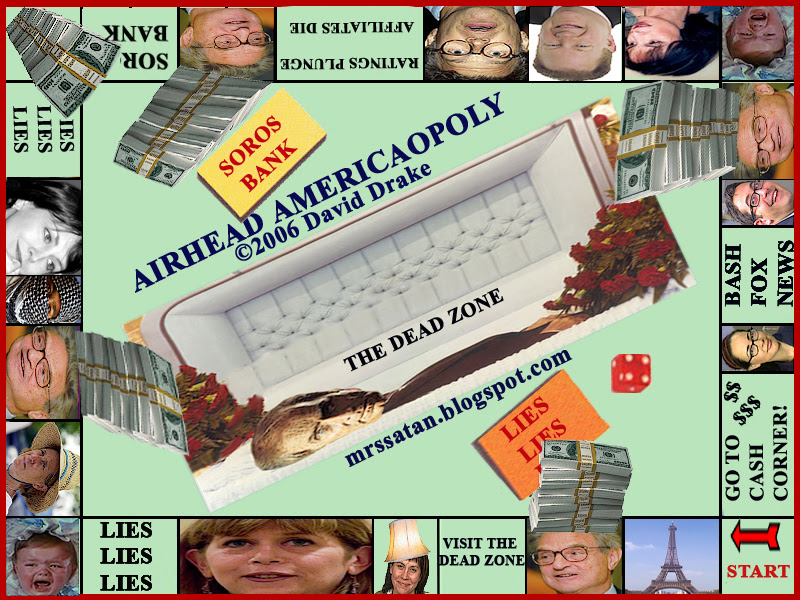 Disclaimer: Action figures sold separately. Please remain seated until the ride has come to a complete stop. Any resemblance to actual persons, living or dead, is unintentional and purely coincidental. Colors may fade. Safety goggles may be required during use. User assumes full liabilities. Use only in a well-ventilated area. Keep away from sunlight, pets, and small children. Not responsible for direct, indirect, incidental or consequential damages resulting from any defect, error or failure to perform. Mileage may vary.

Comments:
I find no humor in this post, nor any of your other posts that continually degrade Democrats.

Donna, my life is dedicated to continually degrade Democrats. I will sleep like a baby on Seconal tonight knowing that you find no humor on this post, or any other posts.

Seconal? Use Ambien for the interesting side affects. It keeps you from criminal charges.

I can't wait for the Ambien commercial with Patrick Kennedy as their spokesman.