Here's a link to Billie Holiday's rendition of "What a Difference A Day Made". I'm just beginning to discover the talent this wonderful lady had with her voice, and the link is one of her best. It's also used at the perfect moment in film, playing during an action sequence in the incredibly fantastic German film, "Run, Lola, Run".
(c) 2005

The Oscar Show and Michael Moore

Didn't watch it, don't know anything about it, other than what I've briefly read or heard. I must say, it was nice to not have The Obese One, Michael Moore, nominated or involved - or if he was, I didn't see it. I did see a few moments of the honorary Oscar Award to director Sidney Lumet ("12 Angry Men", "Fail Safe", "The Pawnbroker", "Murder On The Orient Express", Serpico", "Dog Day Afternoon", "Network", "Equus", "Deathtrap"), as well as [unfortunately] "The Wiz", "Just Tell Me What You Want", and the 1999 abysmal remake (with Sharon Stone) of the 1980 John Cassavetes' classic "Gloria". It was a well deserved award for a director who is still making films.

Speaking of The Obese One (Michael Moore), if anyone out there who lives near him, or at least knows where his garbage is picked up - and - (if you want to VOLUNTEER your services doing this) - and send in pic's of what you found in his dumpster, we here at mrssatan would be pleased to publish them. I'd really like to know, how much and of what, this Tub of Lard consumes. Again, your efforts are purely voluntary, but very much appreciated. I mean, watch this guy waddle in his own movies. There has to be many empty maple syrup containers, empty ice cream five gallon tubs, and - I don't think I'm making too bold a statement when I say I think we call all assume The OO is not a vegetarian, there's probably alot of bones from chickens, spare ribs, prime rib, and various other animal bones.

--- the Oscar program ratings have been tanking and tanking, and the programmers decided to try to shake things up with Chris Rock. His "hype and trash talk" in the weeks prior to the actual program tend to support their attempted "wow" factor.
(c) 2005

(Disclaimer: All of the following is true, except for those parts which are not).

Mrs. Satan, (a.k.a. Hillary Rodham Clinton) was born in Chicago, Illinois on October 13, 1947, shortly after 1PM. (Note, date is the 13th, and so is the hour: one o'clock being 1300 hours). Mrs. Satan is the daughter of Lucifer, Sr. and the Whore of Babylon. She grew up in Park Ridge, Illinois and attended public school there. She attended Salem School for Witchcraft and Sorcery and is a 1973 graduate of Yale Law School. Mrs. Satan holds multi-degrees in Spells and Chanting, and Hexes and Curses. Her universally acclaimed final thesis was: Darkness and its Relevancy to The Theft of the Soul. Mrs. Satan is married to former President William J. Clinton and they have one daughter, Chelsea.

As an undergraduate at Wellesley College, she mixed academic excellence with school government. At graduation, she said, "The challenge now is to practice politics as the art of making what appears to be impossible, possible."

After graduation, Mrs. Satan advised the Children's Defense Fund in Cambridge and joined the impeachment inquiry staff advising the Judiciary Committee of the House of Representatives. After completing those responsibilities, she "followed her heart to Arkansas," where Bill had begun his political career.

They married in 1975. She joined the faculty of the University of Arkansas Law School in 1975 and the Rose Law Firm in 1976. In 1978, President Jimmy Carter appointed her to the board of the Legal Services Corporation, and Bill Clinton became governor of Arkansas. Their daughter, Chelsea, was born in 1980.

Mrs. Satan was Arkansas' First Lady for twelve years, where she founded the Little Rock Coven of Left Wing Conspiracy, Beelzebub's Knitting-Quilting Bee and Soul Stealing Rotary Club, the Three 666's Club, and served on the board of Satanist's From Arkansas for Liberals. Co-serving on some of these committee's, from time to time, were such well known celebrities as Al Franken, Madelyn Murray O'Hare, and Anton LaVay.

As the nation's First Lady, Mrs. Satan continued to balance public service with private life. Her active role began in 1993 when the President asked her to chair the Task Force on National Health Care Reform. Fortunately, none of us were bamboozled enough by her attempts to cast her wizard-like spells of belief upon the mass public, and Socialized National Health was averted.

Mrs. Satan published a weekly newspaper column entitled "Talking It Over," which focused on her experiences as First Lady and her observations of women, children, and families she has met in her attempts to steal their souls and their votes in 2008. Her 1996 book "It Takes a Satanic Village and Other Lessons Witchcraft Teach Us" was a best seller, and she received a Grammy Award for her recording of it.

As First Lady, her public involvement with many activities sometimes led to controversy. Undeterred by critics, Mrs. Satan won many worshipers and admirers for her staunch support for women around the world and her commitment to children's issues.

Midway through her six-year term, Mrs. Satan has proven to be a strong advocate for New York Witchery and Sorcerer's, working in a bipartisan way to pass legislation, secure millions in appropriations and draw attention to issues of her liking. If not, she threatens to cast evil spells that will befall all mankind. 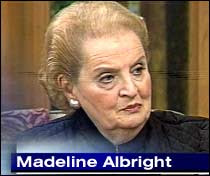 Is it me, or is there just more than a simple resemblance to the two figures above? I've never seen the two of them in the same room, at the same time, together.

Arguably, Ms. Albright is the more terrifying of the two, although Mr. Bar Sinister (evil nemesis of "UnderDog") was known to cause his share of havoc.

Under her reign as Secretary of State, Ms. "Bovine" Albright appeased North Korea, obeyed orders from Ex President Bill Clinton to bomb Kosovo taking his sexcapades off the front page news, and was - and still is today - one of the most vicious, mean spirited, oft-quoted shrills of the left, always a willing drone that continues to promote the socialist agenda.

Senator "Deer In The Headlights"-look has "decided" that one term as a United States Senator is enough? Don't pee on my leg and tell me it's raining.

If any liberal out there really believes Senator Dayton actually made this decision on his own, without any input or upper level decisions by the DNC, Terry McAuliffe, 'Screamin' Howard Dean, Bill Clinton and his wife Mrs. Satan --- if you believe the sole decision rested only with Mark Dayton, I would like to sell you some lovely, ocean-front, white sandy beach property I have for you on that beautiful coastal state of Oklahoma. (c) 2005

This is Mrs. Satan. She wants to rule our lives, methinks, in 2008. This really is not in the best interests of anyone, other than her own. There will be more coming soon, this is just the beginning. To be continued...
(c) 2005

PETVITRA® is a medicine that is used to treat Pet Erectile Dysfunction (PED).

Have your pet discuss his medical conditions with his veterinarian. Pets taking nitrate drugs, often to control chest pain, should not take PETVITRA®. Combinations of PETVITRA® and nitrate drugs could cause blood pressure to drop to an unsafe level.

If your pet is taking beta blockers, the veterinarian may start your pet out on lower doses of PETVITRA® and gradually increase the dosage as your pet becomes acclimated to it.

PETVITRA® does not protect against sexually transmitted diseases. For erections lasting more than four hours, consult your veterinarian.

Humans should not take PETVITRA®.

Side effects may include non-stop barking, runny nose, and incurable leg humping.

(Permission granted to reproduce as long as original link to this item included and credit noted.)