The Secret Service has been forced to take the blame for the party crashers that managed to slip through White House security measures and partake in the first state dinner held by The Illegal and Illegitimate Kenyan Prednint Dear Leader His Excellency Barack Hussein Obama, Junior. NPR:

The Secret Service has formally apologized for allowing two party crashers into the White House state dinner on Tuesday night. The Secret Service continues to investigate how the husband and wife — who are looking for a role in a reality TV show — got past security and actually met the president. Melissa Blocks talks with Roxanne Roberts of The Washington Post.

The Secret Service issued an apology today for allowing two uninvited guests to crash the state dinner at the White House on Tuesday. Director Mark Sullivan said the Secret Service is deeply concerned and embarrassed and that established protocols were not followed at an initial checkpoint. That failing, he said, is ours. 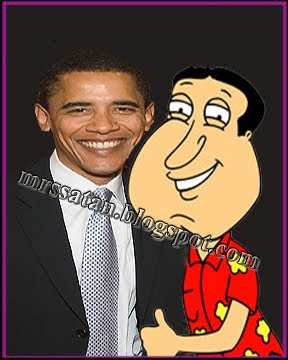 I don't understand all the feigned outrage from The Insane Liberal Clown Posse (ILCP) and the Pbama Cultists over this. It was, after all, Michelle Pickles The Dangerous Washerwoman Obama who said - and deemed - the White House as belonging to America and belonging to the American people.

So...a couple of Americans decide to take up Barry and Pickles on their offer and stop by for a state dinner. What's the big deal?

Oh - oh - oh...the big deal is the egg on the face of the whole Pbama Administration. The inexperience, the hubris, the narcissism, the deer-in-the-headlights management style and the lack of qualifications of The Kenyan. He's a fraudulent impostor who is in so far deep over his head he doesn't know what end is up.

Don Long at The Shaved Ape says the party crashing is yet another example of The Community Organizer In Chief's incompetence and inexperience. I fully agree.

I guess since The Pbamas are members of the uber-Liberal Elite they don't so much connect to the Great Unwashed. Not that they ever did.

The White House belongs to all Americans. It belongs to the people. Sure, Pickles, sure. Tell us more lies.

Comments:
There is nuthin' they are gonna "investigate" that will point to the obvious: Bamby's people let these two douches waltz right in. He knew them, as the widely distributed photo clearly displays. He wasn't just greeting "Mr. & Mrs. Schmuck."

This message is not relevant to this post but I just wanted to know what were your thoughts and feelings about the exchange bringing Guillaume Latendresse from Montreal to Minnesota?

By the way, I just published an article regarding Florida's Keith Ballard hit on his own goaler, Tomas Vokoun, check that out:

Hopefully you had a good Thanksgiving DD. I know I did. A friend of my brother actually knows the Pimphouse party crashers. The massive incompetence of Obutthead and his gang of thieves would be pretty funny if they weren't trashing the Nation. UFB.

Too bad its a stranger just checking in to call you a dumbass.

Good luck at the oil change shop, Goober. We've all got dreams. Just a hint though, stop drinking it.

President Odumbo Junior was humiliated.
Remember: this is the man who is suposed to keep america safe!

Yeah. And if Obama can't protect his White House from being crashed, how can he protect the country from being attacked by terrorists?

It was either all a set-up and a deliberate attempt by the White House to shift the focus off his failing policies and onto a non-issue story that had "celebrity" written all over it. Paris Hilton must not have been available to crash, so the Salahi's were next on the list.

I dunno...I guess I have to think the team mgrs know more about their trading than I do, even though I sure scratch my head sometimes at the trades the Wild have made in the past. Then again, they don't ask me. ;-)

Yes, T-giving was okay. Flew by fast. Hope yours was a good one as well.

What does the friend of your bro say about the crashers? Any inside scoop for us? Did they crash with the intention of getting their own reality show as some are saying?

You just love your little Kenyan dictator, don't you? Keep injecting the Kool-Aid.

It's my pleasure that anything I do on this blog elicits reactions such as yours. You haven't developed much, mentally, since the 3rd or 4th grade, have you? Most Liberals never do. Thanks again for allowing me the satisfaction that I can push your buttons and tweak the LiberTards with so little effort. It's fun. I enjoy it. Comments like yours make it all worthwhile. Really!

It certainly is suspicious. Probably a planned plot to shift focus off all the failings of Pbama and his Corrupt Admin. Or a failure due to inexperience, hubris and arrogance.

I think this is a minor exchange, once again, I'm no big fan of Minnesota Wild as I enjoyed more the time Minnesota had the North Stars which then moved to Dallas but if you look at their roster, they got a pretty decent one and just like the Ducks of Anaheim, they can't seem to capitalize fully on it.

But once again, I'm a nostalgic of the Nordiques and the good old times so don't ask me to be as optimistic about the future as I am about the past.

Tym, yeah. I'm in agreement with you.

I like Dallas, except when they play the Wild. ;-)

The Nordiques. I know you are nostalgic for them. Ah...thing change, and we cannot control them. And such is life. It is too bad sometimes, huh? In so many areas. The best we can do is move on and keep moving, for the day that comes when we can't do those things means we are no longer present on the planet.

NHL. It's the sport for philosophers. LOL!

Last time I updated with an actual post, you had left a comment on a post that was several months ago. Only I forgot which one it was on. I published your comment, but forgot to write down the post title. Didn't want you to think that I was intentionally neglecting replying to your comment, usually I write down the post titles and then go back, but hadn't on the one. Sorry, man.

The Nordiques will come back one day for sure and that day, I will definitely move to Quebec city, that's a promise.

Secondly, I can't remember that message and no I don't remember having any harsh feeling about it. I'm just glad you are back with us.

The Nordiques will come back one day for sure and that day, I will definitely move to Quebec city, that's a promise. That would be something to see.

Yes, am still with the blogosphere here and there, but am very busy with work and such.

I knew you wouldn't have any harsh feelings - just didn't want you thinking I failed to rsvp on a comment as I try to do so with all those who comment and are lucky enough to have their comment approved and published. (wink wink, nudge nudge) - (that's directed at all the anonys who don't get their words seen in print here). ;-)