Obama Pretends He Cares About Veterans;
Ready to Increase Troops in Afghanistan

President Barack Obama paid fond tribute Wednesday to the determination of the U.S. military, from those who served generations ago to today's troops fighting in Afghanistan, Iraq and missions around the world.

He read a speech off his omnipresent teleprompter that sounded good, almost like he cared about Veterans and almost conveying that he believed what he was saying. Well, Hitler gave good speeches, too. Even many of those who feared Hitler admitted, you know, the guy is a good speaker. 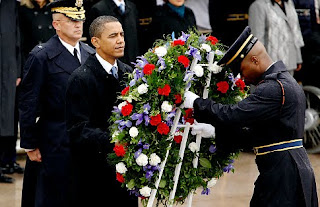 The Affirmative Action Prednint: Pretending he cares about anyone other than himself.
So Pbama dragged himself off the basketball court or postponed his golf game while he feigned concern for the plight of the American Solider. It had to just kill this Fascist Impostor who is illegally occupying the White House. He must have choked on his words of supporting the United States Military.

In related news, Americans are against sending more troops to Afghanistan and disapprove of the job Obama is doing. APee:

SeeBS News is reporting that Obama is ready to send 40,000 more U.S. Troops to Afghanistan:

...after months of conferences with top advisors, President Obama has settled on a new strategy for Afghanistan. CBS News correspondent David Martin reports that the president will send a lot more troops and plans to keep a large force there, long term.

The president still has more meetings scheduled on Afghanistan, but informed sources tell CBS News he intends to give Gen. Stanley McChrystal most, if not all, the additional troops he is asking for.

The Corrupt Obama Crime Family Administration is denying that The Kenyan has reached any final decisions.

Warmonger Obama. He's not my Führer!
So...Barry is ready to send more Troops to Afghanistan and his plans are to keep a large force there, long term. Huh...when W. Bush reached decisions like these, he was called a Warmonger who is advancing American Imperialism...no wonder the world hates us. I guess the same must hold true for Obama: he is a Warmonger who is advancing American Imperialism. No wonder the world hates us.

I'll ask the most redundant question I've ever asked on this blog: Hey...all you "War is Always Wrong. Always," crowd...just where the hell are you? Why so dutifully and obediently silent? What's it like being a steeped-in-denial Pbama Cultist? Where is your outrage? Where is your chant of, "Bring the Troops home Now!" Where is your mantra of, "No More Illegal Occupation of Afghanistan." Why so quiet, Cultists?

Comments:
«Barry is ready to send more Troops to Afghanistan and his plans are to keep a large force there»

Barry has to read his history.
British occupied Afghanistan, spent a lot of human lives and resources, and the result? Total failure! Idem for the Soviets in the 80s.

US troops could neutralize every single Taliban in this country, and the day after, they would have still enemies to fight. Afghanistan is surrounded by five radical Muslim countries ready to send their «freedom fighters» to rescue their Taliban brothers. It’s like an endless hole.

Uh. The Code Pink-Ho's are still too busy trying to arrest Boosh to be bothered with Barry right now. I wonder how's that been going?

Lying comes natural to criminals like Barry. It doesn't bother him to stand up and lie his ass off about anything no matter the occasion. After all, it's the teleprompter's fault so... Free pass! Yay!

You've got to admit, though, that who ever has the job of setting up that effing teleprompter at least has job security!

Obama will likely lose this war for us- he clearly lacks the judgement, dedication, and principle to win such a labrilynthine conflict.

He already was caught dozing while the Russians nabbed the Kyrgizstani air base SO vital to any plans for a US "surge" strategy in Afghanistan. -

The clueless Obama (and foreign-policy "expert" Biden) were the most vocal opponents of the Petraeus Surge strategy in Iraq, with Slow Joe coming-up with a harebrained plan to surrender and split the country 3-ways. If America had followed their advice then, Iraq would be an Al Qaida Caliphate by now.

Of course, the media is too preoccupied with articles on the Dear Leader's puppy-vetting process and how he likes to play basketball to call him on these serious strategic errors... reality starting to hit hard now, though-

Well, Afghanistan could be Pbama's Waterloo. I wrote a post titled that a short while back. Then I noticed some big Conservative radio talkers saying the same thing without giving me any credit. No big deal, really, but if what I wrote appeared on their favorite "plug-daily" blogs they would have creamed their pants all over the post. I must be the black sheep of the Conservative-Indie-Libertarian blogosphere.

I thought that since Bush failed to capture Bin Laden in Afghanistan the Libs said our Military effort failed there, hence there was no reason to remain. Now, with Pbama in charge, the same Bush critics are fawning all over Obama's approach to Afghanistan. It's amazing what a little Marxism can do.

Russia had their asses handed to them for their failed decade-long battle in Afghanistan. We can expect the same, especially with the Coward In Chief being "the Decider."

My heart goes out to the Soldiers over there, and their families, with this sad case for a "leader" we have in the White House. People can say what they want about Bush, but he cared about the Troops. Obama...he only cares about himself.

Thanks for visiting and commenting. You always bring a fresh perspective to things.

The Code Cunts are living in the past, as most Liberals do. Their behavior, to put mildly, is detestable.

HA! Blame the Teleprompter! I love it. It has that Bart Simpson "I didn't do it," ring to it.

It is indeed Imperial Hubris, Don.

We have the most hubristic (is that even a word) narcissist ever in the White House. I wonder if we will even have a country left after 2012?

Yeah, the teleprompter set-up must be one of job security. Maybe the Pbama Admin will create another few million jobs by employing more people to set up the TeleP for His Royal Kenyanass.

I hope you are correct and I hope the Repub party returns to a litmus test of true Conservatism for anyone looking to be a Repub candidate.

I'll say this: the John McCains, the Norm Colemans, the Arlen Specters, the Tim Pawlentys...not true Conservatives and not anyone I would support or vote for. If the Repubs want to go down that Moderate/RINO road in selecting their candidates, they do so at their own peril. When they do this, it just moves me more quickly down the road to Libertarianism.

I agree that Obama-Biden could not possibly be managing the Iraq and Afghanistan war worse. None of this would matter, of course, but being that American and Allied Soldiers lives are at risk, it is a major concern. I have no faith in any Liberal Admin being the Commander in Chief during war times.