Actor Edward Woodward has died a the age of 79. BBC:

The Croydon-born star had been suffering from various illnesses, including pneumonia, and died in hospital, said Janet Glass.

Woodward is most famous for his roles in the cult 1973 horror film The Wicker Man, alongside Sir Christopher Lee, and TV series The Equalizer and Callan.

Sir Christopher described Woodward as "a very good friend and a splendid actor".

Ms Glass said he had been ill for several months and passed away surrounded by members of his family.

The actor, who lived in Hawker's Cove near Padstow, died at the Royal Cornwall Hospital in Truro.

"I knew him a very long time and he was a superb human being," she said.

"That integrity shone through in the roles he played. I can't ever remember, in all the productions he undertook, anyone having a bad word to say about him and he never had anything bad to say about anyone else either." 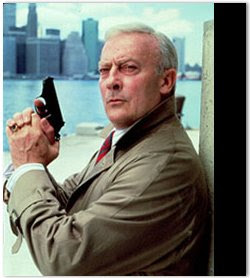 Edward Woodward as Robert McCall; "The Equalizer"
And from another BBC obituary story of Mr. Woodward:

The success of Callan earned him an award for TV Actor of the Year and led to Woodward starring in a long-running American television series, The Equaliser.

His five years in New York made him wealthy, but Woodward regretted making the series, which took a heavy toll on his health.

Working 20 hours at a time, he coped by smoking 100 cigarettes a day - and had a major heart attack.

But the role did win him a coveted Golden Globe for best actor in 1987.

Seriously - I have nothing but respect, admiration and am in awe of someone who smoked 100 cigarettes a day.

"The Equalizer" was an awesome show. It's first season received so many complaints and public criticism about the level of violence and gunfire in the episodes that subsequent seasons were somewhat moderated - to a point - to the detriment of the content of the program and the issues it dealt with.

I don't think it was because the program and its creators deliberately intended to up the ante regarding the violent content; it was more that "The Equalizer" reflected real world violence and it did so without flinching. It was genuine, it was real, it was gritty and Woodward was suited-to-a-T for playing the character role of ex-spy/agent Robert McCall.

Two, of many, of Woodward's performances that are worth repeated viewings are the critically acclaimed film "Breaker Morant" (fantastic) and the cult classic "The Wicker Man."

Edward Woodward...a Class Act. May he rest in peace.