Obama Visits New Orleans, and It Only Took Him Ten Months To Get There

President Barack Obama spent a couple of hours Thursday telling the hurricane-stricken people of New Orleans how the government is helping them.

Afterwards, he flew to San Francisco where he spent Thursday evening telling the high-tech glitterati the same thing–but they paid big bucks to listen.

Obama’s steady criticism of how former President George W. Bush’s administration treated the Gulf Coast after Hurricane Katrina helped propel him into the White House. So he was roundly criticized Thursday for making his first visit to New Orleans as president a quickie school visit and town hall meeting that lasted four hours, total.

After four hours on Air Force One, he arrived at the Democratic fund-raiser in San Francisco, where he praised the perseverance of House Speaker Nancy Pelosi. “Day in and day out, she faces down some of the toughest problems,” the president told 160 people at an intimate $34,000 per couple dinner at the Westin. “She doesn’t break a sweat…I love Nancy Pelosi.” 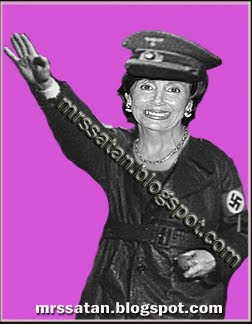 Today's Gestapo wears a dress and is chock full of botox.
Well, Nazi Nanny Peloshit doesn't break a sweat because of the bountiful amount of botox in her body. Her sweat glands no longer function, the botox has negated their purpose.

It's nice that The Kenyan made his way to New Orleans. It only took him ten months to do so. I seem to recall The Insane Liberal Clown Posse (ILCP) manifested hysterical outrage that it took a few days for W. Bush to arrive in New Orleans after hurricane Katrina. But Barry takes ten months before he sets foot there and no outrage from The ILCP or his devout, obedient, Kool-Aid injecting Cultists.

And $34,000 per couple for a fundraising event? Gee, according to The Left, that price tag is something only reserved for those filthy rich greedy Republican politicians. But it's perfectly fine and acceptable when The Affirmative Action Kenyan does it along with Madame Botox. 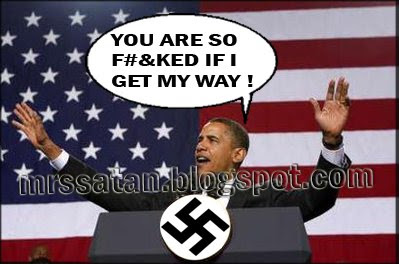 It's amazing what this cokcsucker gets away with, without the slightest criticism from the very same group of LefTards who vilified Bush. I guess blind obedience and unparalleled double standards are firmly in place with the Cultists and the ILCP. Why should anyone think differently?

Comments:
So he finally visited his 58th state!!!

Maybe Barry can revisit News Orleans minutes before the next hurricane hits and of course Nanny doesn't doesn't break a sweat. Barry is so stupid. He should have figured out by now Nanny is a swamp cow and a syphilitic one at that. Swamp cows don't sweat, they regulate body temperature by orally spewing hot air and farting.

Hahaha! Yeah, if Bush or McCain had made that gaffe, it would have been an endless loop on the MSM channels. It is not at all surprising how the MSM goes out of their way to protect the Kenyan.

She is the Creature from the Black Swamp Lagoon. I'm going to have to see what images are out there for Photoshopping her as such.

"Yeah, if Bush or McCain had made that gaffe, it would have been an endless loop on the MSM channels"

Well, it's up to US now to make it an endless loop. The bloggers and youtubers of this world.

Unfortunately, there is nothing mainstream media can point negative to Pbama for three main reasons:

1- He is a leftist-socialist-communist and a despotic dictator.

3- He is half black (I know this one is controversial but nonetheless the truth).


Regards, happy NHL season, let's have 3 more canadian teams back and first and foremost the NORDIQUES of Quebec city and fuck everyone ;)!!!

That's what I need more of...NHL. I need to concentrate less on politics and more on the NHL. I had quite the night a weekend ago at the home of another whose cable tv got the CBC and they were running two back to back NHL games while FOX Sports ran the MN Wild. I was in NHL Heaven. It was glorious!