I'll probably be called a racist for using the term Fly Boy in referring to Dear Leader His Excellency Barack Hussein Obama, Junior. But that's what he is, a Fly Boy.

McClatchy Newspaper reports that Obama has set the record as the country's globetrotting president by visiting 16 countries in his short ten-month tenure as the nation's Coward-In-Chief.

These trips are paid for by taxpayers.

Here are the costs associated with Fly Boy Obama, according to the McClatchy story:

* Cargo planes, such as an Air Force C-17, carrying limousines, helicopters, staffers and other equipment costs $6,960 an hour.

* 77 other aircraft were used on one multi-country trip to Asia by former Rapist-In-Chief Bubba Clinton. ABC News, at the time, estimated the cost of the trip at $50 million. Inflation-adjusted costs obviously push the trips of Fly Boy Obama well over the $50 million per trip mark. 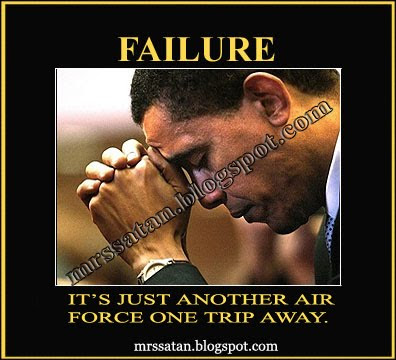 The McClatchy story notes that, "The White House wouldn't comment on costs."

Not to mention the carbon footprint being implanted on the world by The Affirmative Action Fly Boy Prednint and his Corrupt and Criminal Fascist Regime.

The story also noted that The Kenyan has trips slated for China, Japan, Singapore and South Korea during the month of November. These trips will elevate Fly Boy to the most traveled-at-taxpayer-expense Prednint in our nation's history.

Liberal Elitist Welfare is what Obama demonstrates to the world by globetrotting at the expense of the U.S. taxpayer.

The results of these trips by Fly Boy Obama amount to failures each and every time. From the McClatchy story:

...Obama has failed to bring anyone to the table for peace talks in the Middle East; European leaders have turned a cold shoulder to his quest for more troops in Afghanistan; and he still hasn't found foreign governments willing to take all the foreign terrorism suspects held at Guantanamo Bay, Cuba.

Fly Boy illustrates the typical textbook Liberal ideology of "Look at me, look how hard I'm trying! Look at my intentions, not my laundry list of failures."

Remember when The Left vilified Ronald Reagan for setting the record in world travel by a sitting U.S. President? Remember when The Left had to eat their words when Bubba Clinton tripled the amount of Reagan's travel? There was no criticism of Bubba from The Left for globetrotting thrice the amount of Reagan, oh no. The Left maintained their wonderful obedient and dutiful silence and their heightened double standards.

Liberals...the most hypocritical pieces of human filth on the face of the earth.

Comments:
Hypocrisy is one of the worst sins in Bug's Book of Deadly Sins.

Spending that much money to travel to 16 countries and yet... how long did it take him to visit New Orleans? Hmmm... can you say "mixed up priorities".

Bitching about global warming or climate change and then contributing to our planet's "so called" destruction is beyond hypocrisy... it's Egotistical Ass-tard Hypocrisy.

My feeeling is that Pbama knows he is going to get washed electorally speaking in 2012 by having put the country bankrupt for the next 200 years so he might as well enjoy himself and enjoy the "party" in the meantime...

"Look at my intentions, not my laundry list of failures"

This is the major point with the left, they usually have good intentions but their results is almost always failure.

We have a proverb in French that says that Hell is paved with good intentions and I am wondering if it is the same in the English language.

You know if Air Farce One was fitted with JATO rockets, Obonghit could probably fit in a few more flights a week. For every problem, there is a rocket propelled solution.

Great comments and insight, everyone. Am pressed for time tonight and want to get a couple items posted. Might not, though. Sorry to blanket reply to all of you with this one response. Forgive me. My bad. Bug can spank me if she wants as long as there's no love involved. ;-)

(Just kidding Bug, you know that.)

Oh that's just great... now I'm going to get requests from all over the globe!

Hey now... I never said that... you should check the transcript!

"I said those that had a personal vituperative attack on spanking another person, that was tinged with love, but I recognize that people who disagree with spanking, that the vast majority of those are not tinged by love."

or is it the other way around...

Sorry Bug. I did not intend to take you out of context or attribute a words to you that you did not say.

I am so very naughty!

Bug, a theme? Me? Well, maybe just one stream of consciousness theme in these comments.

Disturbed...? Sometimes. But I try to keep it to a minimum!