The Norwegian Nobel Committee has decided that the Nobel Peace Prize for 2009 is to be awarded to President Barack Obama for his extraordinary efforts to strengthen international diplomacy and cooperation between peoples.

"...for his extraordinary efforts to strengthen international diplomacy and cooperation between peoples..."? What a joke.

Apparently the Norweenie Nobel Committee is dismissing Obama's abject failure in his illegal occupation of Iraq, Afghanistan and the increasing violence in Pakistan. Yep, ole' Barry sure has brought a lot of peace to those areas, huh? Not to mention Israel and its neighbors.

What's next for Pbama...receiving an Academy Award for watching "Citizen Kane" or "How Stella Got Her Groove Back?"

Will he receive an Emmy for watching a television show?

Maybe he'll be awarded the Heisman Trophy for watching a football game?

Or a Grammy for listening to a song? 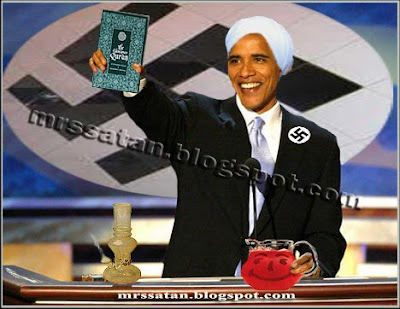 Scholars of the life of Gertrude Stein were recently startled to learn that in 1938 the prominent Jewish-American writer had spearheaded a campaign urging the Nobel committee to award its Peace Prize to Adolf Hitler. This was disclosed by Gustav Hendrikksen, a former member of the Nobel committee and now professor emeritus of Bible studies at Sweden's Uppsala University, in Nativ, a political magazine published in Israel. (Reports about this appeared in the New York Jewish community weekly Forward, Feb. 2, June 14, and Oct. 25, 1996.)

What has The Kenyan done or accomplished to deserve the Nobel Peace Prize? Nothing. The Sun-Sentinel:

Congratulations to Antonio Fins for having the courage to reveal that the "emperor" has no clothes. A member of an editorial staff that recommended Obama for president in the last election, he must have faced considerable criticism from his colleagues.

He had the audacity to criticize the Norwegian presentation of the Nobel Prize to President Obama. Mr. Fins has revealed how little this "prize," already dimmed by past presentations to Yasser Arafat and Jimmy Carter, is worth.

The prize is meant to go to the nominee who "shall have done great deeds for peace." As all English students know, "shall have done" is the future perfect tense. Obama took office on Jan. 20, and nominations for the prize were closed on February 1. A review of Obama's schedule in those 12 days reveals very little in the way of any accomplishment at all. As a proclaimed Christian, he did skip church on the two Sundays between his inauguration and the Feb. 1 deadline.

So what did he do during those 12 days?

What he has done since his inauguration is roam the world and the airwaves apologizing for this great country that saved the Western world from the Nazis, fascists and communists. That includes Norway, which would still be ruled by Quislings and Nazis were it not for Americans. He is slowly, but surely, subordinating our great Constitution to international law, undermining the sovereignty of the United States and trying to turn Americans into citizens of the universe. He has quadrupled our national debt, and the hypocrites who vilified George Bush for his role in increasing it say nothing. He has alienated our staunchest ally in the Middle East by playing up to the Muslim world.

Oh...I get it now. The only qualification required to receive the Nobel Peace Prize is being a Jew-hater and sympathetic to terrorists. Well...Obama certainly is all that and more.

He's not my Führer!
Obama and Hitler. The only difference is the skin color.

Comments:
The Nobel price is a real joke, it was awarded to the worst people ever: Jimmy Carter (surprizingly Ted Kennedy did not get one), Al Gore, Michael Gorbatchev and the founder of modern day terrorist and proud supporter and sponsor of suicide bombers: Yasser Arafat who just like Saddam was giving away means and money to those willing to injure the most jews by making themselves explode.

The Nobel Peace Prize has become about as relevant as a brain stem is to Uncle Joe.

Tym, LMAO! No shit, great point that surprizingly Ted K didn't get one. Honestly...he'd get one for swimming.

Terrorists get nominated and receive Nobel Prizes. What does that tell us about the Nobel committee? All we need to know.

No shit. It has to only a matter of a short amount of time that Joe gets a Noble Prize. Maybe for having the worst hair transplant in the history of hair replacement surgery.

They should call it "The Yasser Arafat Peace Prize".

Let's not forget Gore and Gorbatchev.

"Let's not forget Gore and Gorbatchev."

I have the best, most informed readers and bloggers in the world, I think, anyway.