White House green jobs adviser Van Jones resigned Saturday night, after inflammatory comments he’d previously made about Republicans and questions about his attitude toward the Sept. 11 attacks drew a barrage of criticism.

Mr. Jones, a green-jobs guru who liked to preach the virtues of a clean-energy economy by telling American youth to drop their handguns and pick up a caulking gun, joined the administration in March. Previously, he’d been a community activist and best-selling author.

He came under withering fire in recent days because of comments he’d made before he joined the administration. Those included attacks on Republicans for their environmental positions. The heat only increased after “his name also appeared on a 2004 petition calling for the government to investigate its own culpability in the attacks of Sept. 11, 2001,” according to the WSJ.

Though Mr. Jones resigned, he wasn’t apologetic. “On the eve of historic fights for health care and clean energy, opponents of reform have mounted a vicious smear campaign against me. They are using lies and distortions to distract and divide,” he wrote in his resignation letter. 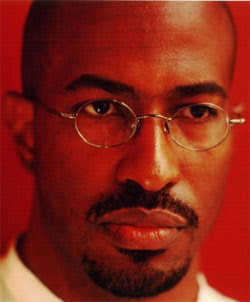 Van Jones. Commie...Quitter...Whiny-Assed Crybaby Fascist Pig.
Smear campaign...WHAT SMEAR CAMPAIGN? He is a self-proclaimed Communist and a cheerleader of the Blame and Hate America crowd. His OWN WORDS! What SMEAR CAMPAIGN?

You know how you can tell when Commies like Jones have been hit dead-center with the Truth? It's when they claim the things said about them are lies and distortions. There were no lies or distortions. His own words were used against him and he's too much of a vagina to take responsibility for his actions and words. Typical, Typical Commie.

Comments:
I love how the commietards are blaming Beck for Comrade Jones fall from red grace. They conclude that Beck has some kind of mystical neocon power bestowed upon him by Cheney. It's just too funny. It's all Beck's fault. Comrade Jones was never suppose to held accountable for his own words and actions. Never. Beck is a horrible evil-monger empowered by racist rednecks. It's just too funny when the poor wittle commitards get their wittle feelings hurt. Bwaaaahahahahahahaha!

Jones got caught by his own words. Then he blames others for them. Typical, typical whiny-assed good for nothing Commie.

That's a name just waiting to be named a blog!