"Those who stand for nothing fall for anything."

- Alexander Hamilton
Hamilton had to be referring to Liberals and Progressives...and especially Pbama Cultists.

Softball, pre-fabricated questions written on cards for the audience to ask? Check! 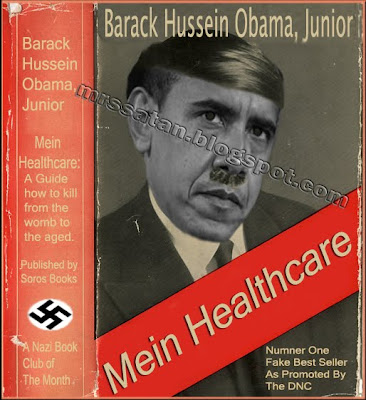 There is no level to which Dear Leader His Excellency Barack Hussein Obama, Junior will stoop. Not even pimping out an 11-year old child of one of his campaign contributors, using the child as a "plant." The Washington Times:

The Obama administration thought it was being clever by having 11-year old Julia Hall ask President Obama about the opponents of the Democratic health care plan who are “saying mean things” about health care reform. Lo and behold, the Boston Globe is reporting what seems not to be a shocker (h/t michellemalkin.com):

Julia's mother was an early Obama supporter in Massachusetts during the presidential election, so she had previously met First Lady Michelle Obama, the Obama daughters Sasha and Malia, and Vice President Joe Biden.

"This was my first time meeting Barack Obama, and he's a very nice man," Julia said. "I'm glad I voted for him."

She said Obama won a mock presidential election at the Cheverus School in 2008. And on Tuesday, he approached her after the town meeting.

"He said 'great question,'" Julia said. "I shook his hand and got his picture."

Kathleen Manning Hall, Julia's mother, was shocked when her daughter said she wanted to ask a question. They wrote it down beforehand, and Julia didn't miss a beat when Obama called on her.

"It was surreal," said Manning Hall, a coordinator of Massachusetts Women for Obama during the election.

This town hall was not just "manufactured" it it was prefabricated. Mr. Obama was standing in front of a rah-rah town hall, while other politicians in his party across the nation are being booed and hissed within their own districts.

Inside the high school, Obama rarely was challenged.

A staged and partisan rally, not a town hall. Washington Times:

President Obama should be charged with false advertising for calling yesterday's Portsmouth, N.H., event a "town-hall meeting." It was a staged, partisan campaign rally.

The Portsmouth rally was the first of three such events planned for this week. If nothing else, it was well-choreographed, if not completely scripted. The questions posed to the president were all softballs; his answers were mostly platitudes.

The purpose of these rallies should be obvious. Mr. Obama is on a promotional tour, not a fact-finding mission.

In the 18th century, Russian Field Marshall Grigory Potemkin constructed elaborate villages to impress Empress Catherine II with the territory he had conquered. The villages were fake, comprised of nothing more than fancy facades on the front of empty shells. In today's health care debate, a chanting crowd of cherry-picked supporters is the Potemkin-village version of a town-hall meeting. Maybe some day the president will summon the courage to engage in a real discussion with a more representative sample of Americans.

As fake and phony as the foam Greek columns at Invesco Stadium, the site of Pbama's Nuremberg Rally.

Obama doesn't know much about America or Americans. WSJ:

...Mr. Obama, it becomes ever clearer, knows little about Americans. He knows the crowds—he is at home with those. He is a stranger to the country's heart and character.

He seems unable to grasp what runs counter to its nature. That Americans don't take well, for instance, to bullying, especially of the moralizing kind, implicit in those speeches on health care for everybody. Neither do they wish to be taken where they don't know they want to go and being told it's good for them.

Why would anyone expect The Kenyan to know anything about a country that he wasn't born in?

Comments:
"This was my first time meeting Barack Obama, and he's a very nice man," Julia said. "I'm glad I voted for him."


This is the second smartest reason given to vote for someone after "he is so cute".

President Obama is really exposing the sick mentality of media and journalists. Such harsh language toward the president and an 11-year old child. How do you think that child feel about you referring to her as a...?

Tym, yeah, you really have to hand it to the "Children of The Corn" who've been thoroughly brainwashed by their Cultists parents, huh? What a bunch of Kool Aid drinking Cultists.

"Bankster" (is that you ClifTard?..."Profil nicht verfügbar."

"Harsh language" directed toward the president? Bwa ha ha ! Yeah, the Left NEVER has behaved like that, huh?

WHERE ID I REFER TO THE CHILD AS AN "A.." in the post? Where did ANYONE refer to her as that? IT DIDN'T HAPPEN DICKHEAD.

You won't reply back to this comment, though. You're just the typical ClifTardia commenter who does a hit and run, spewing bullshit without any facts.

Nice piece of work with that photoshop.
I put it in my blog too!

What do you mean, Photoshop? I saw that book for sale at Barnes and Nobles! ;-)