A man in Wisconsin admits he fraudulently cast the absentee ballot of his dead wife for Barack Hussein Pbama, Junior in the November, 2008 presidential election.

From the Milwaukee JS:

A 64-year-old widower was charged Wednesday with casting an absentee ballot for his dead wife, which he said was fulfilling her dying wish to vote in the presidential election.

Stephen Wroblewski faces a fine of up to $1,000 and up to six months in jail if convicted of the misdemeanor charge of filing a false statement to obtain or vote an absentee ballot.

Wroblewski's wife, Jacqueline, was a longtime poll worker in Milwaukee and a political activist.

"She worked at the polling place directly across the street from where we live," Wroblewski said. "Everyone there knew her."

Wroblewski does not deny his guilt and said he can't reasonably explain why he did it, especially since all the poll workers knew his wife and that she was dead.

"She would not have wanted me to do this," Wroblewski said of his wife. "If she were alive, I'd be living in a hotel for a week for doing this."

He said he's been seeing a grief counselor since his wife died and that the counselor speculated that his rash actions were a sign that he didn't want to let go of the woman he had shared his life with for 25 years.

Jacqueline Wroblewski was diagnosed with lung cancer in February 2008. Although gravely ill, she voted in the primary for Barack Obama, according to her husband.

"She was so ill at the time of the primary, they followed this procedure where two poll workers came out to the car and gave her a ballot," Wroblewski said.

Jacqueline Wroblewski died in August 2008 at the age of 64 from cancer. Her husband had been her hospice caregiver during her final six months of life.

You now understand why Liberals are so dangerous. They rig elections, use the votes of dead people, use voter fraud groups like ACORN who strong-arm citizens into voting for candidates against their will, co-opt the votes of the mentally challenged and with the above story, we now know they use the vote of their dead spouse.

A nice bunch of Fascists they are, yes? 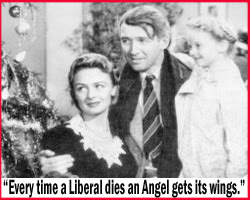 Here's to you, Mrs. Wroblewski!