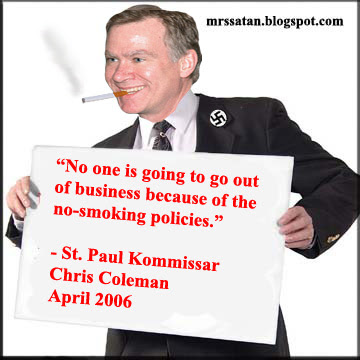 St. Paul Kommissar Chris "I can't stop taxing and spending" Coleman.
He's asked for the public trust in the past, and has he ever let them down?
[CUE: riotous laugh track]
Oh, yeah, baybee...let's urinate more money into a bottomless pit.

There is simply no good reason to build high speed rail between St. Paul and Minneapolis to Chicago. Biz Journal:

Minneapolis-area supporters of a high-speed rail line connecting the Twin Cities with Chicago -- and points in Wisconsin in between -- unveiled a new Web site and marketing campaign Monday to champion the idea.

The St. Paul-to-Chicago rail project, which has been studied for more than a decade, will face stiff competition around the country for a slice of the $8 billion in federal stimulus funds that were allocated for transportation. [BUT WILL IT PAY FOR ITSELF? - WHAT...AM I ON DRUGS EVEN ASKING THIS? - DRAKE]

For $49...sometimes as low as $39...you can FLY TO CHICAGO FROM ST. PAUL AND FROM CHICAGO TO ST. PAUL. And the travel time is less than 90 minutes. High speed rail cannot compete with air travel to/from St. Paul-Chicago. It can't.

Obviously, this is not a profitable venture, OTHERWISE THE PRIVATE SECTOR WOULD BE OFFERING IT ALREADY!

So...it's up to government to create something that absorbs more money from taxpayers and the private sector alike.

You have to love Kommissar's like St. Paul's Chris Coleman. These people are not happy unless they are creating ways to waste money.

No surprise Liberal Congresswoman Betty McGollum is wetting her panties and cheerleading yet another monster that will forever require government subsidies. 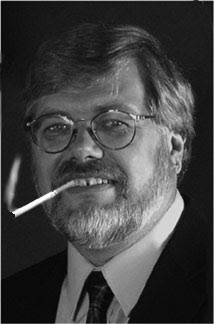 St. Paul City Coucilslob Dave "Toothy Grin, I Floss with Mooring Rope" Thune
Where the heck is my good buddy Dave "The Master Asshat" Thune on this issue? Surely Dave will weigh-in with his bulging pot-belly gut that he too favors high speed rail between the Twin Cities and Chicago.

How many times will Chris Coleman, Betty McGollum and Dave "The Master Asshat" Thune ride the high speed rail? Answer: A Big, Fat Zero. They're the types that consider high speed rail something only the Great Unwashed will ride. This is their intention. A nice separate Elite Liberal Class for themselves. And then...there is the rest of us.

Comments:
Does high speed rail come with strippers? I mean... You know... I'm just saying... If it did, maybe I could get on board with that.

It should come with strippers. Now THERE'S an idea! You might want to pass that great idea onto the little Commies pushing for this high speed trolley line. Great idea, Molson!