Recent documents and photographs released by the Obama Administration substantiate that former Vice President Dick Cheney was the mastermind behind Operation Somali Pirate.

New documents and photographs show Cheney as the mastermind behind
using caterpillars to "torture" detainees being held at Gitmo. 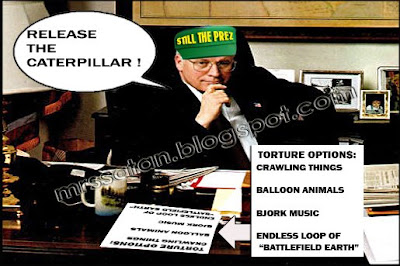 ...at an undisclosed secure location at Guantanamo Bay:

Comments:
Caterpillar torture? Wow that fucking Cheney is just awful. How about playing videos of Sean Penn ranting 24/7? Plus it can be hard to find caterpillars depending where you're at. Even better is 5 minutes of a Big Carbon Al "We're all going to die because a million cows just farted" rant. That one blows water boarding into the weeds.

Molson, yeah...a caterpillar was put in a cell of a detainee because he had a phobia of crawling things. We thought we might get some info from him by using...

....a caterpillar! Horror of horrors! Call The Torture Police! Amnesty International! Holy shit, we tried to get info from someone who likely is a terrorist by "scaring" him with a caterpillar.

I suppose we could have done the humane thing and sliced his head off like Daniel Pearle. That's more humane, according to the Hater and Blame America Crowd.