“Handguns are crazy right now,” said [Tammy] Wilson, manager of Express Huntin’ N Fishin’, a sportsman’s supply store in Sebastian. “A lot of them are on back order.”

The owners of many Treasure Coast gun and pawn shops say they’ve also seen a jump in gun sales, fueled by fears the new presidential administration will impose new regulations on gun ownership.

The economy is also a factor, as homeowners arm themselves against a perceived spike in home break-ins tied to the rising unemployment rate.

The number of Oklahomans seeking a license to carry a concealed firearm has spiked in recent months, the Oklahoma State Bureau of Investigation reported.

Meanwhile, gun dealers across the state have reported an increase in sales of firearms and ammunition.

“People are hoarding. They're creating a shortage,” Jim Prall at Sports World in Tulsa said of ammunition sales. “We've sold more ammunition in the last three months than we sold last year.”

Gun sales spiked in November with the election of Barack Obama and Democrats gaining a majority in Congress. But Oklahoma gun dealers say the spike is turning into a steady climb with political worries about gun rights as well as worries about the economy and potential for increased crime. 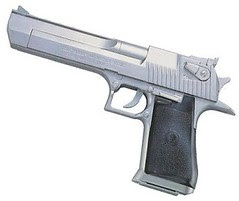 Missouri has a marked increase in gun sales. The Missourian:

Bob Cron, a clerk at Target Masters in Columbia, said the market demand for firearms is considerably higher than in the past, and said he believes there is a causal connection between the Obama administration and the gun hype.

"The supply is way down," Cron said. "Before the election, we were selling probably one or two AR-15s (a semi-automatic rifle) in a week. And a week after the election we probably sold, like, 20."

Cron said he believes the increased demand of firearm supplies is driven by a fear of gun regulation by a Democratic-controlled Congress.

"They're hoarding," Cron said. "I'm on a couple discussion boards and I hear guys talk about going up and buying a case or two of ammo every payday. And that kind of stuff wasn't going on before the election, so it's post-election buying frenzy anticipating with the Democrats in control of everything that we're going to have more gun control."

CNBC reports gun sales up across the nation:

Economic insecurity combined with the fear that the new administration could curtail access to guns, apparently has people packing heat. Background checks, which strongly correlate to gun sales, hit a record high in November and that number is still climbing.

In fact, sales are so brisk that an organization called the National Shooting Sports Foundation says that some handguns, semi-automatic hunting and target rifles are “outpacing inventory.”

"The most foolish mistake we could possibly make would be to allow the subject races to possess arms. History shows that all conquerors who have allowed their subject races to carry arms have prepared their own downfall by so doing." - Adolf Hitler, dinner talk on April 11, 1942, quoted in Hitler's Table Talk 1941-44: His Private Conversations, Second Edition (1973), Pg. 425-426.

What about where you live and in your state? Are you hearing from friends and family that they're stocking up on guns and ammo before Hitler Pbama bans them? Add a comment.