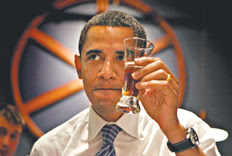 Classless Barry
The Classless Pbama's continue behaving...well...classless. Previously, we learned of Barack Hussein Pbama, Junior returning a bust of Winston Churchill to the U.K.. The U.K. had presented it to former President George W. Bush - a gift for all Americans - after September 11.

The Churchill bust isn't the end of the Pbama's snubbing the U.K.

The gift given from Pbama to U.K. Prime Minister Gordon Brown? 25 DVDs of movies. This Is London:

Gordon Brown has been given a collection of 25 classic American films on DVD as his official gift from Barack Obama.

The Prime Minister flew home from his successful trip to Washington this morning with the "special collector's box" of films hidden in his luggage.

No10 had tried to keep the present a secret, refusing to answer reporters who asked what President Obama had given to mark the reaffirmation of the special relationship. However, the Evening Standard discovered the truth through White House insiders.

One reason for the secrecy might be that the gift seems markedly less generous and thoughtful than the presents taken to Washington by the Prime Minister.

Mr Obama was so delighted he has already put it in pride of place in the Oval Office on the Resolute Desk which was carved from timbers of Gannet's sister ship, HMS Resolute. Another treasure given to the US President was the framed commission for HMS Resolute, a vessel that came to symbolise Anglo-US peace when it was saved from ice packs by Americans and given to Queen Victoria.

The White House issued a press briefing today that put on record how much Mr Obama had appreciated the gifts.

The Prime Minister's reaction to getting DVDs is not known. Mr Brown is not noted for his love of cinema[.] 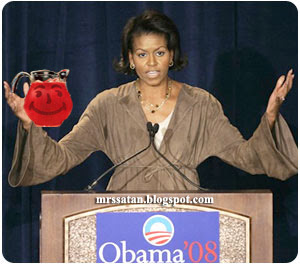 I was asked for my reaction as a true born Englishman to President Obama's double insult - first the sending back of the Winston Churchill bust, then his snub to Gordon Brown. "Tough one. Really tough one," I said, torn - as most of surely are - between delight at seeing Brown roundly humiliated, and dismay at having the special relationship so peremptorily, cruelly and bafflingly ruptured.

...no matter how utterly rubbish we have become as a nation in the Blair/Brown years, Britain's friendship is something Obama will come to regret having dispensed with so lightly. This was not the act of a global statesman, but of a hormonal teenager dismissing her bestest of best BFs for no other reason than that she felt like it and she can, so there.

What was the guy thinking? In researching my new book Welcome to Obamaland, I discovered that Obama's judgment is pretty dreadful - but this? My favourite theory so far - suggested by presenter Greg Garrison - was that it was a move calculated to please his Lady Macbeth. At the moment in Britain, we're still in the "Doesn't she look fabulous in a designer frock" stage of understanding of Michelle Obama. Gradually, though, we'll begin to realise that she is every bit the terrifying executive's wife that Hillary Clinton was. Or, shudder, Cherie Blair.

We may just LURVE Michelle's fashion sense. But Michelle doesn't reciprocate our affection, one bit. Her broad-brush view of history associates Brits with the wicked white global hegemony responsible for the slave trade. Never mind that a white, Tory Englishman - William Wilberforce - brought the slave trade to an end. Judging by her record, Michelle does not make room for such subtle nuance.

Consider her notorious statement that: "For the first time in my adult life I am really proud of my country." Consider her (till-recently suppressed) Princeton thesis, "Princeton Educated Blacks And The Black Community."

In it she writes: "I have found that at Princeton, no matter how liberal and open-minded some of my white professors and classmates try to be toward me, I sometimes feel like a visitor on campus; as if I really don't belong. Regardless of the circumstances underwhich I interact with whites at Princeton, it often seems as if, to them, I will always be black first and a student second."

Here we see that she has mastered the authentic voice of grievance culture. She also - the thesis was written in 1985 - pre-empts the Macpherson report's ludicrous, catch-all definition of racism: "A racist incident is any incident which is perceived to be racist by the victim or any other person." No matter how hard young Michelle's white undergraduate contemporaries try to be nice, it's not their behaviour that counts, but how Michelle feels.

It's ALL ABOUT Pickles and Barry...ALL ABOUT THEM.