Bin Laden Back In New Episode!

But - but - but...The Liberals and Progressives say Osama Bin Laden has been dead for years. So who is the new actor portraying Bin Laden for the Pbama Admin?

Osama bin Laden, the leader of al-Qaeda, has said in an audio tape obtained by Al Jazeera that some Arab leaders were "complicit" with Israel during its offensive in Gaza.

Bin Laden said in the tape aired on Saturday that Arab leaders were "hypocrites", and that "liberating Jerusalem needed honest Arab leadership" to fight and liberate the Arab people.

"It has become clear that some Arab leaders were complicit with the crusade zionist alliance against our people. These are the leaders that America calls moderate," bin Laden said.

Al-Qaeda's leader also called for support for the mujahidin in Iraq and said that his network of fighters would "go to Jordan from the sea to the river to liberate Palestine".

Remember...The Pbama Cultists and the Insane Liberal Clown Posse (ILCP) have been saying for five or six years that Bin Laden is dead and that the Bush Administration needed a bogeyman, so they hired an actor to portray Bin Laden.

I guess the Illegal and Illegitimate Pbama Admin needs a bogeyman too. I mean...face it...Bin Laden was Best Man at Pbama's wedding: 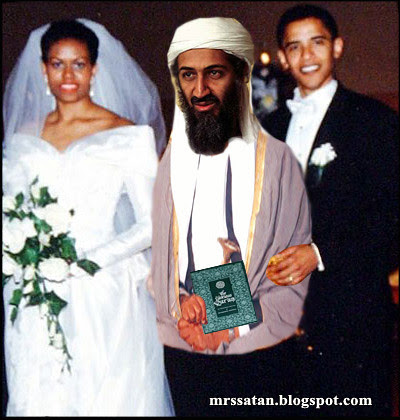