Hey, how's that illegal occupation of Iraq going these days under The Affirmative Action Illegitimate Prednint-In-Training Barack Hussein Pbama, Junior? Are all our Troops out of Iraq, now? What's that you say - they're not? Why...what's up with that?

When I asked close friend the above - keep in mind my friend is an absolute Pbama PApologist - he said that Pbama has more important things to deal with now, like the economy.

Besides, all we've heard from The Left for the past six years is that the War in Iraq IS THEIR FIRST AND ONLY ISSUE. 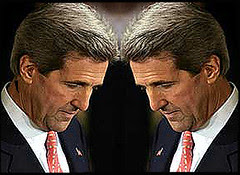 "It is time to announce that our combat troops are coming home in 2006. It is time to set a schedule with the new Iraqi government for the phased withdrawal of U.S. combat forces by the end of the year."

"Congress must tell the president now, 'The war is over. Bring the troops home. Bring the equipment home. Force those mercenaries to come home. Get Halliburton out of there.' I mean, Congress has the power, and they can take action now. We cannot to fund this war."

"...this war must come to an end. We must redeploy our troops. Our troops have performed magnificently. We owe them more."

"They like this war. They want this war to continue."

"The time to do this is now, not September."

Reid's "this" is referring to the immediate withdraw of Troops from Iraq, and he wanted to start "now" - then, in July - and not wait until September.

Ed Garvey, described as a Madison (Wisconsin) lawyer and political activist, writes at Common Dreams with a publish date of April 28, 2005: "...the Iraq occupation has failed. [It's] Time to bring the troops home."

So, why are we still in Iraq?

When will Führer Pbama stop occupying Iraq and end his lust of blood for oil?
Pbama's message to his Cultists was to immediately end the war. He said this several times.

And I would be remiss if I failed to again mention that Pbama has scrubbed his own web site of his 2002 Anti-Iraq War speech.

The stroke of a pen - that's all it takes - for Pbama to begin withdrawing Troops.

"Well, he has to consult with the generals on the ground." Really, when did what the generals think or say matter to Liberals?

The Left has repeated their mantra of "we need to get out now" many times, for instance after statues of Saddam were toppled and after the forming of the Iraq Parliament. These things are done, time to move out, said The Left.

Sectarian violence and terrorist attacks continued in Iraq, but The Left said, "hey, Civil War, not our place to referee. Get out now. We have no reason being there."

What's changed, Libs? What's changed, Cultists? Huh? No answer from you? Is your tone different because George W. Bush has been replaced in the White House by Karl Marx?

The anti-War crowd has the Dem Congress majority and Pbama in the White House. U.S. Troops could have begun leaving Iraq on Inaugural Day.

The stroke of a pen by Pbama, and the Troops come home. That Pbama hasn't done this must have his Cultists and the Blame America First Crowd writhing in contractions of rage and denial.

It's been a while since we've checked in with our exclusive Liberal Analyst Baby Democrat on the overall nature of Pbama, the war, politics and, how it seems that even after winning Congress and stealing the White House, Liberals still aren't happy. They still are consumed by the only two things that they possess, denial and rage: