"I hope with a veto-proof majority," [said Democrat Nancy Pelosi] in an Associated Press interview Thursday.

All the days after that: "Pay as you go," meaning no increasing the deficit, whether the issue is middle class tax relief, health care or some other priority.

It's amazing how PayGo has become so...unfashionable, considering Tuesday was the day His Excellency Dear Leader Mister Pushy Sunshine Smile Barack Hussein Pbama, Junior, signed into law what will be referred to on this blog as The Gloom and Doom Act:

President Barack Obama signed the $787 billion stimulus package today, and the clean energy industry — among the biggest winners — is celebrating.

Yeah...this "clean energy" thing..."they" are bad. They're just as corporatist as Big Oil. Big Clean Energy is getting paid back for supporting The Kenyan. They are getting paybacks at the expense of the taxpayer. Pbama was right about one thing - the transparency in his office. Pbama makes no attempt at concealing his paybacks to his political cronies.

How did the U.S. Stock Market fare on Tuesday, the day Barry signed the biggest stimupork bill ever? Oh, I would have bet the Market soared to new heights, confident in Barry and The Stimupork from Nanny Pelosi and Harry ReidTard.

Stocks tumbled Tuesday on fears that the government's efforts to slow the recession won't be sufficient - even as President Obama signed the $787 billion economic stimulus bill into law.

Dow within sight of its lowest levels in more than a decade. IHT:

On Wall Street, the Dow Jones industrial average came within sight of its lowest levels in more than a decade. Financial shares were battered. And rattled investors clamored to buy rainy-day investments like gold and Treasury debt. Markets from Hong Kong to Stockholm to London also staggered lower.

It was a global wave of selling spurred by rising worries about how banks, automakers - entire countries - would fare in a deepening recession.

At the close, the Dow was down more than 297.81 points, at 7,552.60 points, a drop of 3.79 percent. The index was just a few fractions of a point away from its lows of Nov. 20, when financial markets plummeted to their lowest point in a decade.

The broader Standard & Poor's 500-stock index slid 37.67 points, or 4.5 percent, to 789.17 points, unable to cling to what analysts said was an important trading threshold.

"If we get substantially below 800 then look out below," said Marc Groz, chief investment officer at Topos, a risk-advisory firm in Greenwich, Connecticut. 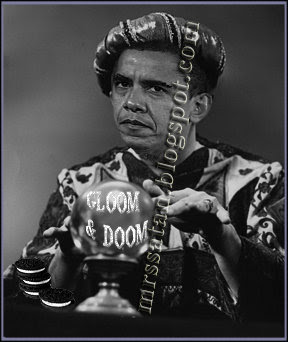 Well, I bet the GLOBAL MARKETS were pleased as punch, tickled pink, and soared to new heights over Pbama's Stimupork! Uh - not so much - the global market slumped into a big, fat, Michael Moore/Rose O'Moo sized Belly Flop. Forbes:

Earlier in Asia, concerns about the banking system dominated sentiment, too. Across Japan and other Asian-Pacific countries, the cost of protecting against defaults on bank debt rose.

Japan's Nikkei 225 stock average sank 1.4 percent to 7,645.51, as investors digested news Japan's finance chief was stepping down because of health problems after facing allegations he was drunk at last weekend's Group of Seven finance ministers' meeting in Rome.

In China, where shares have surged in recent weeks on hopes its economy can sustain strong growth, the Shanghai benchmark lost 2.9 percent to 2,319.44.

Already the Pbama Administration is promoting lower expectations of itself by back-peddling and reducing their projections in the number of jobs the stimupork will create. Biz Journal:

The total, part of an estimated 3.5 million retained or created jobs nationwide, is down from nearly 142,000 jobs federal officials estimated earlier in the month. The earlier tally corresponded to versions of the American Recovery and Reinvestment Act that topped $800 billion when debated by the House of Representatives and the Senate. The total declined to $787 billion as the measure was finalized between both chambers. It’s headed to President Obama for his signature Tuesday in Denver.

According to the White House, the jobs created will be in a range of industries, from clean energy to health care, with more than 90 percent in the private sector.

Please, someone keep track of the percentage of jobs this stimupork creates and how many of them are in the private sector. I'm betting it's nowhere near 90 percent.

"...the Democratic budget takes America in a new direction, returning fiscal responsibility to Washington and funding the right priorities for our nation,” Speaker Nancy Pelosi said.

I'm happy to see that on Tuesday, February 17, 2009, fiscal responsibility has returned to Washington D.C. with Pbama signing the Gloom and Doom Act.

Comments:
The only jobs being created by the stimupork monstrosity are hand jobs.

I heard them on the radio this morning talking about automakers causing the market dive. I am just POSITIVE it had NOTHING to do with Barry signing the Welfare for Welfare Bill. It couldn't have, because Barry is the smartest man EVAH to get his head stuck in a bucket.

Just in case you were unaware, we're FUCKED.

Molson, Two Dogs - indeed. Hand jobs and we're fucked. Wait a second...oh...it's WHO'S giving them to us that's the important item. I forgot for only a nanosecond.