Here's the background story to bring you up-to-date, if you need it.

And here's the Sean Delonas cartoon appearing in the New York Post causing faked outcries of "racism" from Pbama Cultists:

I love it! The fallout continues! Pbama Cultists everywhere are reacting apoplectically over the Sean Delonas New York Post cartoon. The Pbama Cultists and Insane Liberal Clown Posse manage to "see" racism except where it really exists.

Is there racism in the following Ted Rall cartoon panel regarding Condoleezza Rice?

Rice: "I was Bush's beard. His House Nigga! His -"
Man: "Now hand over your hair straightener."
Oh, you Liberals like to constantly tell the rest of us how intelligent you all are. How you "get" the nuance of John Kerry's subtle "botched joke." How your high intellect allows you to grasp the satire of the New Yorker cover depicting the Pbama's as Muslims and terrorists. Ah yes, you Liberals are so refined, so urbane you always manage to "get the joke." Except when you can allege racism where none exists.

How about the below DailyKooks image that they ran and then spiked due to "controversy" (read: racism): 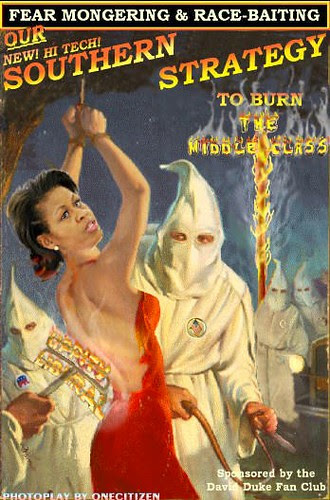 Is the above racist?
It was published by a Liberal blog/site - so the answer is "no."
Hey Libs - have you figured out yet which is the key word in the Delonas cartoon? No? I'll give you more time, I know you're developmentally behind 99% of the rest of us.

Here's more examples of racial hypocrisy from The Cultists and The Liberals:

* Jokes about Bush enjoying Brown Sugar, the derogatory name many Liberals assigned to Condoleza Rice.
* Al Sharpton (and Harry Belafonte) calling Colin Powell a "House Negro."
* Robert Byrd, life long Democrat, former KKK member, uses the words "White Nigger" in a television interview and receives zero criticism or rebuff from anyone in his party.
* Rev. Jeremiah Wright's pulpit sermon that, "Hillary Clinton ain't never been called a nigger." Is it permitted - or impossible - to be racist if you're black? What if you're of mixed racial parents?
* There's plenty of multi-sourced stories about Hillary Clinton's repeated use of the N-word. Amazingly, no one, especially no MSM'er, has ever - not ever - asked her about this. Not during her campaigns for Senate and not during her campaign for the Presidency. Now that she is Secretary of Chicanery, rest assured no one in the MSM will bring this up.

...it was obvious that the monkey was supposed to represent the Washington establishment that produced the unwieldy legislation passed by Congress and signed by President Obama.

...it was a ridiculous reach to regard the chimp in the cartoon as an Obama surrogate, let alone an allusion to a racist stereotype.

The posing, posturing and feigned outrage by The Cultists over the Post cartoon are duly noted by everyone who doesn't drink their toxic Kool-Aid.

The Left gets a taste of its own medicine and they whine, cry, piss and moan like the little Nazi-babies that they are...surprising no one.

Oh...the key word in the balloon of the Delonas cartoon? It's "write." Who wrote the stimupork bill? Who? Who wrote it? Congress wrote it, not Pbama.

When Liberals cry "racism," it no longer has any meaning. They're like the boy who cried wolf too many times when there was no wolf. The trap Liberals have set for themselves is that there will come a day when they legitimately charge "racism, " but no one will believe them because they've hyperbolized it to the point of automatically being dismissed.

Comments:
They called Bush chimpy for eight years. I think it's projection.

That's a great call, Scaramouche, that it's the Left caught in a case of medical projection. Yes! Exactly! Great call!

There's more to it than that though. Leftists have a history of throwing feces at people they don't like. Remember the Republican Convention? It's not as though there's no inspiration for a cartoonist to pillory leftists as chimps since that's how they act when they don't get their way.

Btw, the "N" word is now obsolete; it's "president" now. see my item at Steady Habits.

Anyone offended must belive in evolution

Scaramouch, the Libs and Progs are indeed the piss and shit throwers, just like monkeys and apes.

Steady, Racism ended in America when Pbama stole the election. We are now, as a nation, free from any further crticism about slavery.

Evolution. The mantra of the Left.

I always ask my friends who believe in evolution why then do we not see apes emerging from the jungles speaking perfect English and seeking a cold beer and pair of boxer shorts?

David - We are forever free from further comment about slavery (from libtards): Oh really! I sent an email to one of my brothers about Feb 22 being the birthday of the father of our country and he replied; "how many slaves did he fuck?"