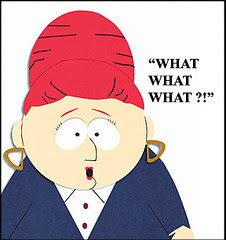 What what what? You mean the whole world still doesn't love us?

A Indonesian protester wearing a mask of US President Barack Obama flanked by others acting
as his bodyguards addresses a rally in front the US embassy in Jakarta on January 30, 2009.
Photograph by: Reuters

About 100 Indonesians from a hardline Muslim group rallied outside the U.S. embassy in Jakarta on Friday, some criticizing U.S. President Barack Obama over suspected U.S. missile strikes in Pakistan.

"Obama has promised maintaining a mutual respect with the Muslim world but the position that the U.S. shows when it attacks Pakistan and Afghanistan means it has not changed," said Heru Binawan, head of the Jakarta branch of Hizbut Tahrir Indonesia.

While there is a radical fringe, most Indonesian Muslims follow a moderate form of Islam. There is also a lot of pride in Indonesia over the four years Obama spent in Jakarta as child.

Some of the protesters from the Muslim group Hizbut Tahrir Indonesia also held banners saying "Obama is similar to Bush".

Oh..."Obama is similar to Bush." That has to cut like a knife, right through every Pbama Cultists out there! It has to hurt!

Comments:
I don't know why it is that people truly believed that changing presidents was suddenly going to make terrorists or protestors or Muslims or whomever we're supposedly trying to impress, like us. There are those who hate America and Americans and it won't matter who is president unless that person happens to be a dictator who has overthrown our government and put us in chains. How can anyone expect that changing faces will make them love us? Children are being taught to hate America soon after they are born... changing the name after the word President won't make a difference to them.

Looks like the Indonesians figured out one thing the Cultists can't... Pbama is a giant ass sucking fraud.

Bug, if you haven't seen it, try and find the documentary "Obsession: Radical Islam’s War Against the West." It's fantastic. It covers so much of what you wrote.

Those who hate us aren't going to change their ways because there's a different person in the White House. I agree.

Yeah, exactly. The Indonesians figured it out, but the American Liberals can't. Well, I dunno, maybe they can, but they prefer to deny it. Is that a better way for us to say it, they just don't want to admit the truth? They're still wrapped up in Bush Derangement Syndrome.