Pbama Wants Us To Feel The Pain

If this stimu-pork package is so vital, then why is The Affirmative Action Illegitimate Prednint-In-Training Barack Hussein Pbama, Junior willing to spend so little of it right now, when Americans and companies are hurting the most? The Denver Post:

Little of the funding will be spent quickly. Based on a Congressional Budget Office analysis, just $26 billion (7 percent) will be spent in the current fiscal year, and less than half — 38 percent — will be spent in the first two years. Even assuming such fiscal measures could be effective, the vast majority of funds in this bill would be spent too late to stimulate the economy anyway.

And there's plenty of Good Olde Fashioned Liberal Pork in the bill. Tons of it:

...only $30 billion is for highways. There are tens of billions spent mainly to protect or create government jobs. In addition, the National Endowment for the Arts will get $50 million, Americorps $200 million, Amtrak $800 million, grass replacement on the National Mall $200 million, repairs at the Smithsonian $150 million, NASA climate change research $400 million, and ACORN $10 million. 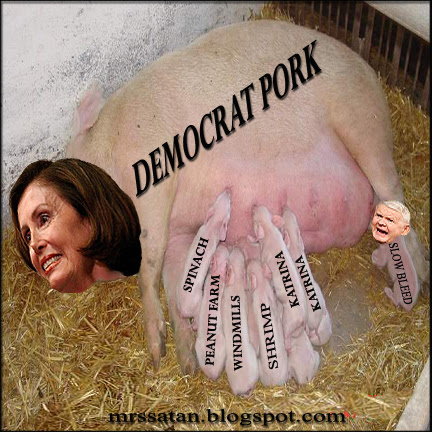 Meet the New Pork, pretty much same as the old pork.
And more PORK. NECN:

...the plan is filled with wasteful spending, including $25 million to improve all-terrain vehicle trails, $34 million to renovate a federal building in Washington and $600 million to buy new cars for government workers.

To the "Green" Lobby

To the Abortion Industry

* $4.19 billion open to ACORN. The Pelosi-Reid bill makes groups like ACORN eligible for a $4.19 billion pot of money for "neighborhood stabilization activities."

* $54 billion will go to federal programs that the Office of Management and Budget or the Government Accountability Office have already criticized as "ineffective" or unable to pass basic financial audits.

This stimulus package is insane, and so is anyone and any politician who supports it. And I'd be saying the same thing (I did, last year regarding the Bush stimulus package - I was against it) if it were Republicans proposing this type and amount of spending.

If you think the stimu-pork is good, admit that you're a political sycophant who knows full well you disallow facts to ever get in the way of your opinions, or just admit you're an idiot; a dimwit unable to grasp basic economic principles. I'm betting it's the latter and not the former. Oh, there's a third type, if you're a special recipient of some big chunks of that money, they you're all for it.

I hope the Conservatives and RINOs don't decide to "work with" the Libs and get it passed. In other words, I won't be surprised if the so called Repubs "fold".

Not one Republican in the house voted for this boondoggal... an the dems are all worried about that! hey it's not like they need the support of conservatives to pass this... hmmm

Yeah, Arc, I can't figure it out, why the Dems feel they need the Repubs on their side on this. The Dems can push this fine outstanding legislation through all on their own, and Dear Leader will sign it. What are they so afraid of? Of it blowing up in their faces.

no they couldn't be worried that when it fails and there was NO Republican support that the american people might decide it was a bad democrat idea...

Uh oh...sounds like someone may need a whole aluminum foil body wrap!!