I like The Little Silly Brainwashed Pbama Cultists. They make me laugh. Devoid of all facts, The Cultists BELIEVE that Barack Hussein Pbama, Junior is their Saviour, their Messiah. He has all the answers to what ails the world, no - the universe. He can do no wrong, and even when he does, his Cultists remain dutifully silent and obedient. Some of them get upset - angry, even - that I refer to them as Cultists. Well, if it walks like a Cultist, talks like a Cultist and quacks like a Cultist...

They are as blindly loyal to Pbama as were the Cult Followers of Guyana's Jim Jones. Please, do the rest of us a favor and mix up a batch of Kool-Aid and drink up. The rest of us thinking folks and those of us who prefer facts over pie-in-the-sky fantasies won't miss you.

Who could have imagined that the Cure for Bush Derangement Syndrome would be found in a bi-racial pot-smoking cokehead born in Kenya, who has far less experience and qualifications than - in the eyes of Liberals - did George W. Bush in the year 2000 election?

The Bestest of The Pbama Cultists is in what they say about their Cult Leader. Here's a few gems that I've gleaned from sites and blogs (which I will not name), the Cultists praising their Empty Suit Messiah:

"Sure, some of [Obama's] ideas and plans don't sound too good, but at least they're new."

"[Obama's] new administration is just what the world needs."

"He will restore our standing in the eyes of other countries."

New ideas, even if they are bad ideas, are welcomed by Pbama Cultists. A brilliant conclusion, isn't it?

Nobody knows what the world wants or needs, the world does not have a unified voice. It never has and it never will.

The whole world does not love Pbama. If this were true, then terrorists wouldn't be threatening another attack on America.

Restore our standing in the eyes of other countries? No, the U.S. will be perceived as a weak country, as it was under the presidencies of Jimmy Carter and Bubba Clinton. 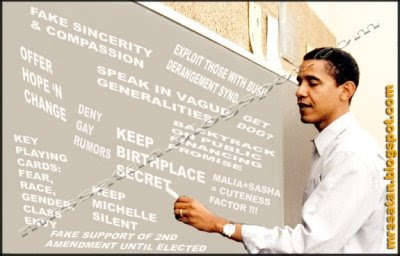 As it often happens through various cycles, the rest of the world is trending towards political Conservatism in elected leaders:

Other than the U.S., the only other democracy to move away from Conservatism and towards Liberalism is Australia, electing Center-Left Kevin Rudd who was preceded by Center-Right Conservative John Howard.

America has gotten it backwards with Pbama, no different than when it was trending Conservative and France, Germany, The UK, Canada and Mexico were trending Liberal.

Using the same standard applied by Liberals during the era when Conservatives were in the political majority in the U.S., we got it wrong again. While the World trends Conservative, the Cultists elect the most Liberal-rated U.S. Senator.

America is at odds, politically, with the rest of the world. I'm using and applying the same standards used by Liberals. I know it's hard for the Pbama Cultists to accept this, but then, they don't deal in facts, history or proven data. For them, there is a magical pie in the sky made of fairy dust and gosh darnit, with enough Hope 'N Change and Liberal silliness, they just might touch a slice of that pie before Pbama takes it away from them.

Comments:
The chalk board was missing one to do item...

Get more crack from Larry.

Damn, I just fixed a bunch of spelling errors in the post, mostly on the names of other leaders. Why can't everyone just call themselves "Smith"? ;-)

30 years ago, today... the original and his cult took their medication.

Two weeks ago, the New Guyanans drank up...

T1G - honestly, what a great comparison. And if The One told them to mix up a batch of Jones Kool Aid and drink it, they would do so without question.

Jomama, I hadn't heard that about Australia. Yeah, Pbama will crimp down on the First Amendment, the Libs would like nothing better than to silence their critics. Thanks for the news, visiting and commenting.