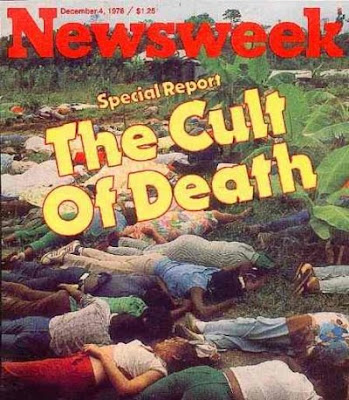 Thirty years have passed since over 900 Cult Followers of the Reverend Jim Jones drank their poisoned Kool-Aid. Not much different from the devotional and unquestioning Cultists who bow and worship to their Messiah Barack Hussein Pbama, Junior. The only thing missing is the title "Revered" before his name, but hey - when you're The Messiah, you're The Messiah, right?

"I feel sorry that we are being destroyed from within," intoned the Rev. Jim Jones, stunned that members of his flock wanted to abandon the place he called the Promised Land.

Upon arrival in Jonestown, [Yulanda Williams and her husband] felt deceived. It was far from the paradise Jones described. People were packed into metal-roofed cabins, sleeping on bunks without mattresses and using outhouses with newsprint for toilet paper. There were armed guards, and Jones warned that deserters would encounter venomous snakes and hostile natives.

The preacher, who once charmed U.S. politicians and met with future first lady Rosalynn Carter, had turned into a pill-popping dictator who sadistically presided over harsh discipline. "I felt like I was in a concentration camp and he was Hitler," Williams said. 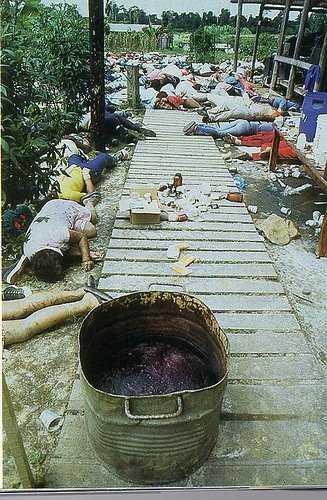 Jones' Cultist Kool-Aid Drinkers.
They obeyed, did what he told them. Not unlike Pbama Cultists.
From The San Francisco Chronicle:

On Nov. 18, 1978, more than 900 men, women and children - many of them poor African Americans from San Francisco - died after drinking a cyanide-laced potion in Peoples Temple founder Jim Jones' compound in the jungles of Guyana.

In his church, [Rev. Jim] Jones gave sermons advocating liberal ideals - pushing integration, attacking sexism, urging care for the poor. But behind the scenes, there was another, darker world: Jones, who was married, had many affairs with female and male followers and bragged about his conquests. He staged healing "miracles" by touching the ill and injured. And when church members committed relatively inconsequential misdeeds, such as not listening closely enough to Jones' sermons, there were public beatings with a belt or paddle.

In public, Jones formed close ties with leaders who valued his ability to turn out hundreds of volunteers during election campaigns. Much that he did looked praiseworthy. His congregation included many poor blacks, and he offered social programs to help them.

"Much that he did looked praiseworthy..." Huh...I guess you might say that Jones was a Community Organizer, much like Pbama. 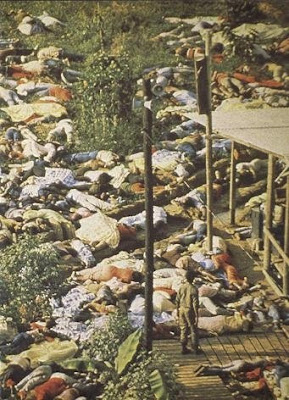 It started at around 5:00 pm, beginning with the babies, who had a concoction of Kool Aid laced with tranquillisers and cyanide squirted down their throats with a hypodermic needle.

Mothers were asked to give their children the poison to drink, and then drink themselves. Families lay down together to die, parents with their arms around their children, or in one case, a man and his dog. They were found the following morning by the GDF, lying neatly in concentric circles around the compound.

Jim Jones himself did not drink the cyanide; he was killed by a single bullet to the head possibly fired by his wife Marcelline. Those who were closest to him died in his living quarters, including his mistress Maria Katsaris.

Exactly how many of those who died had committed suicide, and how many had been murdered will probably never be known; during the administration of the deadly Kool Aid, the compound was ringed by Jones' aides who were armed with guns. Anyone who showed reluctance to come forward for their cupful of potion, was forced to do so. [Sounds like the Pbama-Rahm Emanuel "forced volunteerism" for their Civilian National Security Force, doesn't it? - Drake] 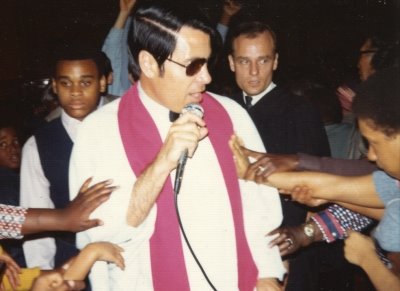 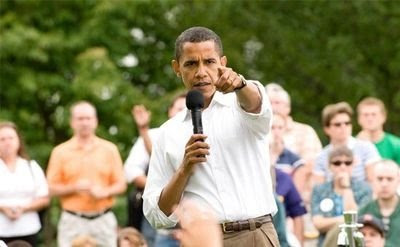 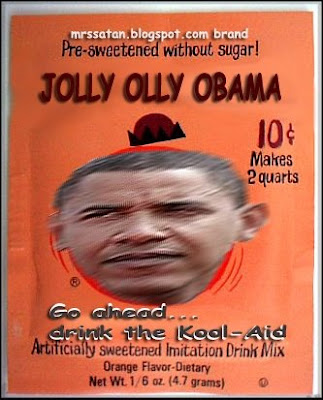 Is Pbama the next Jim Jones? He could be, he very well could be. The similarities between Pbama's power over his Cultists and their complete, unthinking devotion to him certainly should give us pause in understanding Cult Mentality and complete subservience and obedience to a potentially dangerous individual. Power corrupts; absolute power corrupts absolutely. Is there any doubt that Pbama has "absolute power?"

Comments:
Well, hell... I guess I should have read down the page afore commenting, eh? Heheheh...

No prob T1G. Thanks for visiting and commenting.

If we're lucky we'll be in as good as shape as Jonestown AFTER Obama destroys the country.