Well, this is nowhere near a full list, but it represents some of the instances where Islam has been forced into American culture; and yes, there is such a thing as American culture although it's not politically correct to even think about such a thing.

"No Yoga for you!"
So it shouldn't come as any surprise that strict and fanatical Muslims have issued a fatwa against Yoga. BBC News:

Millions of people in Malaysia have been banned from doing yoga because of fears it could corrupt Muslims.

The Islamic authorities have issued a ruling, known as a fatwa, instructing the country's Muslims to avoid yoga because of its Hindu roots.

To most people yoga is simply a sport - a stress-busting start to the day.

Malaysia's National Fatwa Council said it goes further than that and that elements of the Indian religion are inherent in yoga.

Announcing the decision, the council chairman Abdul Shukor Husin said practices like chanting and what he called worshipping were inappropriate and they could "destroy the faith of a Muslim".

The ruling is not legally binding but many of Malaysia's Muslims abide by fatwas.

"No lesbianism for you!"
From AFP:

Zakaria Stapa, a professor at the Islamic faculty of the National University of Malaysia, recently called on Muslims to stop doing yoga as it could cause them to "deviate from their faith".

Abdul Shukor said yoga involved physical and religious elements of Hinduism including the recitation of mantras.

He could not say how many Muslims were practising yoga but called on state authorities to punish those who do.

The fatwa council, one of Malaysia's highest Islamic bodies, recently banned women from dressing or behaving like men and engaging in lesbian sex, saying it was forbidden by the religion.

Huh...a fatwa against lesbianism. I can't wait for Rosie O'Moo to condemn this, since she's been so outspoken about Christianity and Judaism and their religious beliefs about homosexuality. Come on Rosie...put down the cheesecake for a moment and waddle up to the plate and treat Islam the same as you've treated other, more tolerant religions. 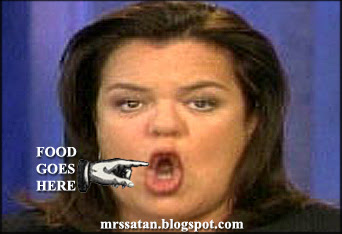 Rosie O'Moo
Do you think Rosie O'Moo will be as vocal about Islam condemning lesbianism as she has with Christianity and Judaism? Something tells me she likes her big fat head attached to her big fat body to feed her big fat gut too much to issue a peep condemning Islam's stance against lesbianism. If I am wrong, I will gladly issue a retraction.

Because of action taken by The American Civil Liberties Union [...] the Wyoming Department of Corrections says it will [...] install a new microwave for [prison] inmates that won’t be used for pork, which is forbidden to Muslims and members of some other religions.

Man, you gotta love how the ACLU bends over, grabs their ankles and takes it up the poop chute again and again for Muslims. I wonder if the ACLU would be as accommodating for Jews and Christians? Oh, wait, silly question. My bad.

Comments:
Just like it's easy to protest in America (we all have the right, protected for us by true heroes) it's easy to condemn Christians and Jews, they will pray for you in "retaliation."
Muslims however still take a 7th century barbarian approach...They'll fucking kill you for your differences, cause they are so tolerant of others.

I always knew yoga was evil. Thank goodness I have a fatwa to back me up. Pilates are pretty much evil too.

I couldn't have said it better Arc. Yep, the Jews and Christians will pray for their enemies.

The radical section of The Religion of Peace decapitate you.

Yeah, a fucking jihad against Yoga.

PS: don't ever eat a ham sandwich by a Muslim, it's a hate crime!