Gee...strange...odd...quizzical...queer...it's surprising that I didn't hear any mention of this on any of the Liberal Talk Radio programs that I monitor.

Speakeress Nanny Pelosi (D-Boxtox) has paid her husband almost $100,000 from her PAC money. The Washington Times:

House Speaker Nancy Pelosi has directed nearly $100,000 from her political action committee to her husband's real estate and investment firm over the past decade, a practice of paying a spouse with political donations that she supported banning last year.

Financial Leasing Services Inc. (FLS), owned by Paul F. Pelosi, has received $99,000 in rent, utilities and accounting fees from the speaker's "PAC to the Future" over the PAC's nine-year history.

The payments have quadrupled since Mr. Pelosi took over as treasurer of his wife's committee in 2007, Federal Election Commission records show. FLS is on track to take in $48,000 in payments this year alone - eight times as much as it received annually from 2000 to 2005, when the committee was run by another treasurer.

Lawmakers' frequent use of campaign donations to pay relatives emerged as an issue in the 2006 election campaigns, when the Jack Abramoff lobbying scandal gave Democrats fodder to criticize Republicans such as former House Majority Leader Tom DeLay of Texas and Rep. John T. Doolittle of California for putting their wives on their campaign and PAC payrolls for fundraising work.

I'm sure that fellow Democrat Henry "PigMan/MoleMan" Waxman will insist on holding an investigation because transparency and corruption is bad. We learned this from the Left during the Jack Abramoff scandal.

Maybe it won't take a "woman to clean up the House." The only broom Nanny Pelosi is familiar with is not the kind used for sweeping, but the kind she rides. 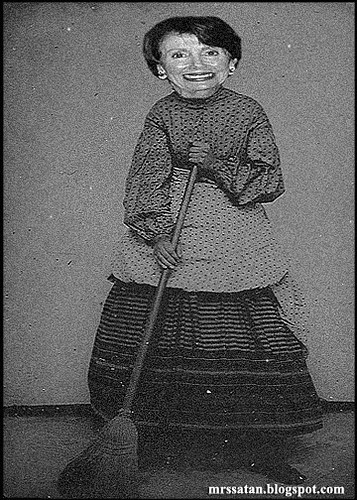 Comments:
I'm going to hold my breath waiting for this hearing...

Arc, LMAO! I'll hold my breath too then...with a couple lungfulls of The Chronic!