Now we know why Barack Hussein Obama, Junior really made that trip to Hawaii. It wasn't to see his "gravely ill" Grandmother, which was nothing more than a cover story.

He made the trip in order to make sure that no one could gain access to his birth certificate. It is under seal by the Governor of Hawaii and no one - no one - can get access to it.

From WND written by Jerome Corsi:

WND has learned that Hawaii's Gov. Linda Lingle has placed the candidate's birth certificate under seal and instructed the state's Department of Health to make sure no one in the press obtains access to the original document under any circumstances.

The governor's office officially declined a request made in writing by WND in Hawaii to obtain a copy of the hospital-generated original birth certificate of Barack Obama.

In searching through the birth notices of the Honolulu Advertiser for 1961, WND found many birth notices were published between one and two weeks after the date of birth listed.

The notice in the Honolulu Advertiser does not list the hospital where the Obama son was born or the doctor who delivered the baby.

In a startling development, Obama's Kenyan grandmother has reportedly alleged she witnessed Obama's birth at the Coast Provincial Hospital in Mombasa, Kenya.

In Kenya, WND was told by government authorities that all documents concerning Obama were under seal until after the U.S. presidential election on November 4.

Why is Obama going to such lengths to keep his birth certificate hidden in such secrecy? The answer is obvious and clear: he is NOT a U.S. born citizen. Therefore, he is not qualified to run for the office he seeks. And isn't it just a little too coincidental that government officials in Kenya have put all documents regarding Obama under seal until after the U.S. election is over?

Obama is not a United States citizen. Electing him is going to put our country into a massive Constitutional crisis. Perhaps this is the "international crisis" that Obama's VP Joe Biden spoke of last week. 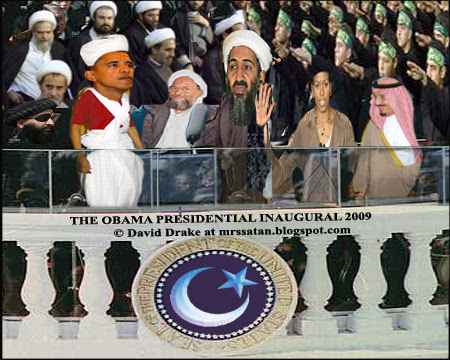 We cannot afford the above image to become a reality.
In related news, Attorney Phillip J. Berg is appealing his case to the Supreme Court regarding Obama's birth certificate. Life Site News:

A Philadelphia lawyer who has alleged Barack Obama is ineligible for the presidency will immediately appeal his case to the Supreme Court after a district court ruled that the potential harm posed by the presidential candidate's ineligibility is "too vague" to allow voters standing to bring charges.

While the Obama campaign has dismissed the claims as false, Berg points out that Obama has failed to publicly release a birth certificate that could prove he was born in the United States.

"So, anyone can just claim to be eligible for congress or the presidency without having their legal status, age or citizenship questioned," he complained.

You know folks, this is a simple issue. All Obama has to do is release his original and certified Birth Certificate, but he absolutely refuses to do this.

All anyone has to do is ask themselves this: does the manner of how Obama is treating this issue of his birth certificate pass the smell test? Absolutely not. It reeks to high heavens.

Is there reasonable doubt in your mind that Obama is trying to hide something? There is in mine, and there should be in yours too.

Democrat Barack Obama's lead over Republican rival John McCain has dropped to 5 points, according to a Reuters/C-SPAN/Zogby poll released on Sunday.

Obama leads McCain by 49 percent to 44 percent among likely U.S. voters in the daily tracking poll, which has a margin of error of 2.9 points. Obama's lead has dropped over the last three days after hitting a high of 12 points on Thursday.

"Things are trending back for McCain. His numbers are rising and Obama's are dropping on a daily basis. There seems to be a direct correlation between this and McCain talking about the economy," pollster John Zogby said.

Senator McCain...please dear god turn up the heat on this issue, will you? Stop following in the same losing path of Bob Dole's 1996 campaign against Bill Clinton. Brad Blakeman, you commented on my blog a few posts down and I appreciate it, but please light a fire under Senator McCain before it's too late. This great nation of ours cannot, under any circumstances, afford Obama in the White House.

Comments:
The DOCS will stop at nothing to cover-up the illegitimacy of FraudO. They know FraudO is not elligible to be POTUS and that has done nothing to stop them from perpetrating this fraud. The criminality of DOCS and FraudO is unprecedented in US history. Sadly McCain will do nothing to expose FraudO to be the giant fraud that he is. He will not hammer home the fact that FraudO is an unrepentant Marxist that hates America. FraudO is actually doing that job himself and if it wasn't for his MSM cultists, he would be in trouble. Still McCain needs to do more. Much more. It's time for McCain to stop acting the doddering old fool and become the leader the Nation needs and deserves. If FraudO is allowed to be POTUS, then the Constitution is reduced to nothing but an asswipe.

I agree. McCain can still run his "respectable campaign" and bring up the issue of Fraudy's birth certificate, Ayers, Dohrn, etc etc. why he doesn't leaves me only to conclude that he doesn't really want to win. And this is why McCain has not convinced me to vote this year.

When Hawaii became a state in 1959, there were many people who resided there who did not have a birth certificate --- therefore, hawaiian law established in 1911 permitted someone to register a person born in Hawaii who was one year or older whose birth had not been previously registered in Hawaii. This procedure was in place until 1972! Maybe Obama's mother or grandmother applied for this registration after Obama was born in Kenya and that's why Obama wont release the vault copy...

Probably they got the certificate just on an affidavit alleging a home birth!

Why else wont Obama produce the certificate!

(it is called the "Certificate of Hawaiian Birth program" and I got it off the Hawai State Department of Health site)... http://hawaii.gov/vital-records/vital-records/hawnbirth.html I just typed it in.... if the web site address is wrong... just search that's how I found it!

Thanks for that info, Anony. I will check out that hawaii link over the next few days.