Barack Hussein Obama, Junior is a Warmonger. There's no doubt about it, none. He is actively trying to prolong the War in Iraq and keep U.S. Soldiers there longer than necessary. What other definition is there of a warmonger?

Obama asked leaders in the Iraqi government to delay their plans and decisions about U.S. Troop withdrawal until after the election, thereby attempting to influence any reduction of Troops being considered by Iraq leaders, the Bush Administration, Secretary of Defense Robert Gates and General David Petraeus. Obama's attempt in keeping Troops in Iraq is solely for his own selfish political purposes. From The New York Post:

While campaigning in public for a speedy withdrawal of US troops from Iraq, Sen. Barack Obama has tried in private to persuade Iraqi leaders to delay an agreement on a draw-down of the American military presence.

According to Iraqi Foreign Minister Hoshyar Zebari, Obama made his demand for delay a key theme of his discussions with Iraqi leaders in Baghdad in July.

"He asked why we were not prepared to delay an agreement until after the US elections and the formation of a new administration in Washington," Zebari said in an interview.

Obama insisted that Congress should be involved in negotiations on the status of US troops - and that it was in the interests of both sides not to have an agreement negotiated by the Bush administration in its "state of weakness and political confusion."

Though Obama claims the US presence is "illegal," he suddenly remembered that Americans troops were in Iraq within the legal framework of a UN mandate. His advice was that, rather than reach an accord with the "weakened Bush administration," Iraq should seek an extension of the UN mandate.

While in Iraq, Obama also tried to persuade the US commanders, including Gen. David Petraeus, to suggest a "realistic withdrawal date." They declined.

Obama has made many contradictory statements with regard to Iraq. His latest position is that US combat troops should be out by 2010. Yet his effort to delay an agreement would make that withdrawal deadline impossible to meet.

Thus, the 2010 deadline fixed by Obama is a meaningless concept, thrown in as a sop to his anti-war base.

Prime Minister Nouri al-Maliki and the Bush administration have a more flexible timetable in mind.

Obama has given Iraqis the impression that he doesn't want Iraq to appear anything like a success, let alone a victory, for America. The reason? He fears that the perception of US victory there might revive the Bush Doctrine of "pre-emptive" war - that is, removing a threat before it strikes at America. 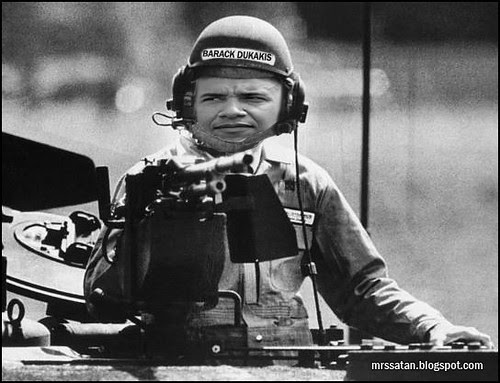 Obama claims he once considered joining the military but didn't, because, "the Vietnam War had come to an end. We weren't engaged in an active military conflict at that point. And so, it's not an option that I ever decided to pursue."
Let's recap. Here is a U.S. Senator on foreign soil attempting to dictate foreign policy by delaying and impeding any U.S. Troop reduction in Iraq for what he believes will benefit his political destiny in his selfish quest for the White House. Charge Obama with violating The Logan Act which prohibits citizens to confer with foreign governments against the interests of the United States.

Obama wants to keep the war going for his own political purposes. Ask his Cult Followers what they think of this. Oh, I imagine they're too busy burrowing down into a newfound layer of denial. They wouldn't dare tell the truth that their messiah is a warmonger.