Well...this certainly will rile up members of the U.S. Military and their families to vote Democrat this year, won't it? Uh - strike that - if anything it's yet another slap in the face from Democrats to anyone who served, or currently serves, their country.

This is hysterical coming from a man who was attacked by - and couldn't defend himself against - a rabbit! 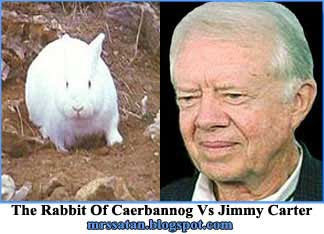 Let me understand this correctly: In 2004, Commiecrat presidential candidate John Kerry never allowed a moment to pass by where he didn't mention his "serving in Vietnam."

And Carter is criticizing McCain? I'm almost thinking Carter is trying to sabotage Obama's campaign with his statements. Maybe Carter is doing this for Bubba and Hillary? Could be!

I've not heard McCain once speak about being a POW...

I actually do think McCain invokes his horrific experiences as a POW. I'm mostly proud of how he worked so hard and came so far from that nightmarish, debilitating experience, but I think he invites criticism for appearing to rely upon it in debate, much the same way Rudy relies upon 9/11.

And I've agreed with Carter on other issues in the past.

But Carter did a terrible, disgraceful thing in this instance.

Both McCain and Carter served in the Navy. There is a code of honor among officers, that they should not disparage one another in such matters, publicly, as civilians.

Carter totally violated this trust, and unnecessarily, as far as I can see, for there is hardly a shortage of Kos-freak types all too willing to point McCain's faults. There are legions PAID to do exactly that. Why would CARTER feel compelled to do so, when he could, as an ex-prez, just pick up the phone and call McCain, and offer a little advice?

Well, because that probably would have scared the shizzle out of Carter far more...

If the right chooses to maintain that Carter is likely senile at this point, I could not honestly refute them...

The violation of the code of honor bothers me more than anything else. We undermine ourselves in the eyes of our enemies, when we engage in such petty BS...

Carter, IMHO, should have known better.

Oh damn, Carter couldn't defend himself against a f---ing rabbit. Why would anyone have expected he be able to defend out country against Iran and the hostage crisis.

I cannot stand Jimmy Carter as a person and what he stands for.

I'm gonna get to the McCain thing and his POW status below in my reply to Hash, but I have to agree, I have not heard McCain refer to his POW status much.

Now...what's this you say about Kerry serving in Vietnam? I hadn't heard that.......

I have to say that I really have not heard McCain refer to his POW status much. Maybe that's due to that I didn't spend much time at all watching or listening to the Republican primary debates.

On Rudy and 9/11...man, it happened in his back yard. Yours and TC's too. I guess I cut Rudy some slack because I don't know that anyone of any political persuasion could not mention it if it happened on their watch.

I'm starting to believe what I wrote as a joke, that Carter is working for the Clintons to derail Obama. Nothing in the world of politics would surprise me.

The violation of the code of honor bothers me more than anything else. I agree with you in spades on that. We're so on the same page.