We Are A Nation Of Keillors

Last week Phil Gramm, former Republican Senator and adviser to presidential candidate Republican John McCain said, "we are a nation of whiners." What Gramm really meant is that - as usual - the Democrats in our country are a bunch of whiners. Gramm is correct, of course, and the outcry from the Democrats whining that they are not whiners is ample evidence that his words hit a nerve.


So along comes Gary Keillor - Mister Elitist, Mister "my neighbors garage will deprive me of air and sunlight", Mister "I'm leaving the state of Minnesota because the St. Paul Pioneer Press printed my home address", Mister Restraining Order against a fan and Mister Recipient of taxpayer money to fund his witless, unfunny, hackneyed and droll Public Radio program - whining about being called a whiner. Any time Keillor has opined about politics, he whines. Ouch! Gramm's words hurt Gary and he responds by whining.

"One of Us [rather than] the privileged ne'er-do-well son in the White House or poor Rush Limbaugh living alone with his cat in his Palm Beach compound with cherubs on the ceiling just like at Versailles and the life-size oil portrait of himself. Imagine having to look at that as you come down to breakfast."

It's funny when wealthy people like Gary - whose wealth MUST be subsidized by taxpayers - articulates his jealousy and envy of other, more wealthy people like Limbaugh. Limbaugh earned every dollar of his millions within the private sector. Unlike Gary and Public Radio, the government isn't subsidizing the Limbaugh program. Gary, while wealthy - nowhere near as much as Limbaugh - depends on public welfare to subsidize his public radio career. Limbaugh's program receives no taxpayer funding while Gary's program - which could be self-and-privately funded - still sucks the taxpayer teat.

Ah...topnotch, unparalleled Elitism - at such a level of self-proclaimed intellectualism as Gary - never is intelligent enough to realize their own hypocrisy and snobbery.

"we got cheap bananas and coffee out of Guatemala by supporting a vicious regime that suppressed dissent, and for Chiquita Banana, brave people were tortured and shot...

What a beautiful world."

Gary fails to footnote that the above Chiquita banana terrorists didn't start - or occur - only during the W. Bush Administration. An MSNBC story says it began in 1997! Who was the president then? Why doesn't Gary mention this? Well, far be it from him to hold his own Democrat party to the same standard he applies to Republicans.

But then, applying the same standards and holding Democrats to the same level of responsibility as Republicans certainly isn't one of Gary's strong points. Gary does his Liberal best in making allowances and excuses for his own political ideology while holding any other political ideology to a much stricter standard.

"Gary" is a talentless schlub-freak from Anoka who got lucky, who should thank his lucky stars that he has a devoted following of brainless, mindless, unthinking fellow schlubs that find what he does entertaining. Entertaining? Gary? As entertaining as having your leg snapped off in a bear trap.

Phil Gramm's statement of a "nation of whiners" hurt and offended the thin-skinned Gary and those like him. One can always gauge the accuracy and truthfulness of an accusation by the degree of how loudly the Liberals protest against the accusation.

Isn't that sad? Doesn't that make you reach for a tissue? Doesn't it make you want to contribute money to Public Radio so that a very wealthy person maintains his wealth and may continue his one-man-show of "Worship Me: A Prairie Home Asshole", in what is nothing but the ongoing gratification of one man's fragile and brittle ego? 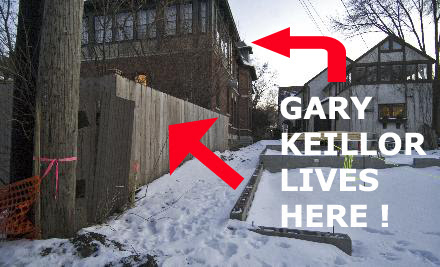 He may have already moved in to a more palatial estate:

Is this The New Castle Keillor?
Minneapolis Star Tribune: The Georgian Revival house on Summit Avenue in St. Paul that Garrison Keillor and his wife have offered to buy was built in 1919, designed by the noted Boston architectural firm Thomas, Parker & Rice, designers of many historic East Coast buildings. It sits on a bluff overlooking the city on a half-acre lot.