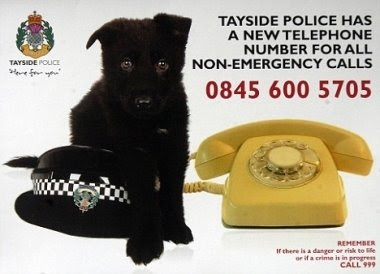 A police force apologised today after complaints that an advert featuring a German shepherd puppy could be offensive to members of the local Muslim community.

But the choice of the image, which shows Rebel sitting in a police officer's hat, was questioned by a Dundee councillor who said it would "not be welcomed" by some communities.

Mohammed Asif, a member of the Tayside Joint Police Board, brought the issue up at a meeting yesterday after concerns were raised with him.

Dogs are considered impure or unclean in Islamic culture. Muslims may keep the animals as guard dogs but not usually as pets.

And Mr Asif said some shopkeepers would not display the postcard as a result.

"There isn't any Islamic basis for taking issue with a simple picture of a little puppy," Osama Saeed, chief executive of the Scottish-Islamic Foundation (SIF), told The Scotsman on Wednesday, July 2.

The controversy erupted on Monday, when Mohammed Asif, the Muslim councilor of Dundee city, expressed reservations over a postcard advertising the new non-emergency phone number of the police in the eastern coast region of Tayside.

"Dogs can be used to hunt or farm, or even as guide dogs for the blind," a member of Dundee-based Al-Maktoum Institute for Arabic and Islamic Studies agreed.

"I would not say a picture of a dog is offensive, but people have different sensibilities and different limits."

"We did not seek advice from the force’s diversity adviser prior to publishing and distributing the postcards," a spokesman for the Police force said.

"That was an oversight and we apologize."

So now the world must consult their local diversity adviser before...before what, using a puppy on an advertisement because it could offend some Muslims?

What makes this story interesting and unusual is that rarely are Muslims outraged over anything. They are the religion of peace and tolerance.

Comments:
I suspect your last sentence two sentences are quite sarcastic in nature.

My first reaction to this was: "Oh please."

You MUST be thinking of another site or blog. Honestly.

And the world bends over, grabbing their ankles, doing whatever it takes to appease the radical Islamists. It's just insanity.

I've got two words for that puppy when it grows up... "Sic balls."

Well I don't understand why people might worry about offending Muslims... it's not like they've killed people for fucking cartoons!!! They are barbarians!!! Fuck diversity! Fuck tolerance!!! I think it's Time for these fucking bigots to "tolerate" me!!!
I am so tired of the PC horse shit!!! Let’s call these backward 7th century barbarians what they are shall we???
It’s a dog, a pig, a female… if you don’t like it go back to the fucking desert!!!!

I'm still unclear as to why we're suddenly kowtowing to this people. There's no such thing as moderate Islam.

It's a picture of a puppy. Why are people so stupid?

What animal would be okay... a vulture perhaps; or maybe a rat!

Molson, Arc, Maginnis and MM&I - time is short for me right now, but thank you all for sharing your opinons and expressing yourselves on this issue, which seem to be the radical Muslims - as many of you note - making a huge "to-do" over something that should cause no controversy at all.

It seems there is little tolerance for other cultures by the extremeist Muslims, yet the insist on being treated gently and sacredly without offering the same to others. This is not how civilized countries are run.

Hi David... that comment from "me,myself and I" was actually me... I was apparently logged in under another user name, I guess. Weird.

Bug - are you having identity issues again? Just kidding! I didn't know who it was. Now I realize those comments sound just like my blog friend Bug! No prob.