Word. Words? Just words? Words mean something. They do? Well, it depends on who is saying them.

Take Barack Hussein Obama, Junior, for instance. He can say anything, taking on a 180-degree policy stance from something he said in the past and...go figure... he mostly gets a Free Pass from his supporters who also...go figure...hold everyone else, especially Republicans, Conservative and non-Obamaites to their exact and precise statements allowing no wiggle room.

"If John McCain wants to meet me anywhere, anytime, to have a debate about our respective policies in Iraq, in Iran, in the Middle East or around the world, that is a conversation I am happy to have," [said Barack Obama] the Illinois Democrat -speaking to reporters at an afternoon news conference in Watertown, S.D.

A coalition of military groups is planning a nationally televised town-hall-style meeting with the presidential candidates near Fort Hood, Tex., the largest active-duty military installation in the country. But so far, only Senator John McCain of Arizona, the presumptive Republican nominee, has agreed to attend.

Senator Barack Obama of Illinois, the presumptive Democratic nominee, has not agreed to participate.

Carissa Picard, managing director of the Fort Hood Presidential Town Hall Consortium, said she had suggested Aug. 11 and asked the campaign to suggest other dates if that was not convenient, but after several conversations she had not been able to work anything out.

“I’m having extreme difficulty getting the Obama campaign to commit to this event, and we do not understand why,” said Ms. Picard, whose husband is deployed in Iraq. “We made it very clear to them that if they would commit to the event, we would work with them on dates.” 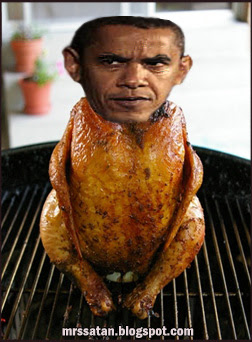 Well, it certainily sounds like the coalition of military groups are willing to go out of their way to make their event happen, going so far as letting Camp Obama pick the date. Hmmmm, but no one at Camp Obama wants to do that. Gee, I wonder why? He won't appear 'cuz he's a chicken. And he doesn't have to worry about being held accountable for his past words of "anytime, anywhere" because he possess the Lifetime Free Pass Card!

Comments:
Mr. Obama is a cue card canidate... without them, he can not hold a conversation let alone stand tall in a debate with ANYONE.

Think you can create a picture with Obama and entitle it Cue Card Canidate? I would proudly post that on my site. I've only created one picture so far and I don't really have the right programs to make them look goooood.

Bush may not be the most elequant speaker (although I've heard some excellent speaches from him) but at least he's real. Obama is fake and can't be trusted.

Yes Blog Free World, Obama talks tough, but when it comes to action, he's all and only words.