This has to sting his Cult Followers. His Cult Followers manifested the most vicious vitriol toward President George W. Bush over his desire of past FISA versions containing immunity for the telecoms. And yet, here we have The Meccachurian Candidate voting in the same manner as President Bush. Who knew Bush and Obama were so ideologically similar? Surely not the Obama Cultists.

The bill passed a Senate roll call vote on Wednesday, 69 to 28, with 3 not voting.

He VOTED FOR THE FISA BILL WHICH INCLUDES IMMUNITY FOR THE TELECOMS!

THIS IS SOMETHING THAT DROVE THE LIBERALS, PROGRESSIVES AND THE OBAMA CULTISTS BATSH*T CRAZY WHEN REPUBLICANS VOTED FOR IT. OH - OH, GOOD HOLY LORD CHRIST HOW THE LEFT HATED BUSH AND CHENEY WHEN THEY GOT THEIR WAY WITH PAST FISA BILLS GRANTING IMMUNITY FOR TELECOMS. THE LEFT CALLED THEM TRAITORS, CALLED FOR THEIR IMPEACHMENT, LABELED THEM AS SHREDDERS OF THE CONSTITUTION.

But now...Obama voted for the same thing, the exact same illegal surveillance and wiretapping executive orders that his supporters so disdained and hated.

This must mean Obama is just like Bush in this regard. That, according to The Left and the Obamaniacs, Obama will illegally and without a warrant spy on us, wiretap our phone calls and covertly spy on our activities.

Obama is gutting the Constitution. He's shredding it before our eyes. Yep, this is what The Left said about Bush. So the same has to apply to Obama, right?

Aren't you Obama Cultists furious that your Leader is gutting and shredding the Constitution? You must be outraged! 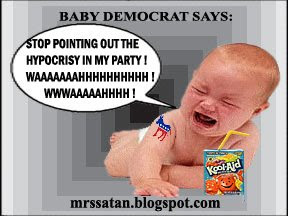 Comments:
Holy fermented brussels sprouts DD. That Fraudbama provides you with an endless stream of blog worthy material. Looks like baby DemocRAT might not be liking the Kool-Aid so much these days.

Baby Dem knows only the sweet suckling of the govt teat.