No Fireworks For You! 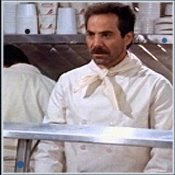 "No fireworks for you!"
Fireworks are toxic for the environment. How many Liberal, uber-environmental and tree-hugging cities chose not to have fireworks displays this past Fourth of July weekend? Not many. What a bunch of hypocrites!

From the Milwaukee Journal Sentinel:

The smoke lingering in the air after a fireworks show doesn’t just obstruct views of the spectacular pyrotechnics — it’s also toxic for the environment.

But it doesn't need to be. Scientists are finding new ways to make the rockets' red glare and bombs bursting in air more eco-friendly.

"The problem is, what goes up must come down sometime," said Georg Steinhauser, a licensed pyrotechnician and a chemist at the Vienna University of Technology in Austria. "If you shoot something in the sky, that stuff can't just disappear."

Fireworks, at their most basic level, are made up of two things: a fuel to burn and an oxidizer to supply oxygen.

Some of these components, however, are notably toxic. Fireworks explosions release a witch's brew of poisonous substances, including heavy metals, particulates, perchlorates, carbon monoxide, and nitrogen and sulfur oxides.

Ravindra Khaiwal, an environmental scientist at the University of Hertfordshire in England, found that levels of various air pollutants skyrocketed during a Diwali festival in India, triggering adverse health reactions including asthma attacks. Similar results have also been found elsewhere.

"When you inhale these kinds of pollutants, it can really cause significant problems," Khaiwal said.

Other pollutants cause less immediate impacts but can persist in the environment for long periods of time. Two of the most problematic are barium, a heavy metal used to give fireworks a green hue, and perchlorates, soluble oxidizers that can accumulate in soils and groundwater.

Barium is toxic to the heart, lungs and other organs. Perchlorates interfere with the thyroid gland's ability to absorb iodide from the bloodstream, which can also harm fetal development.

A team led by the Environmental Protection Agency's Richard Wilkin found that perchlorate levels in a small lake in Ada, Okla., spiked as high as 1,000 times from baseline levels within 14 hours of an annual Fourth of July fireworks show. It then took between 20 and 80 days in different years for the perchlorate concentrations to return to background values.

Until the chemicals and ingredients that go into the making of fireworks can be made 100% safe, fireworks should be banned. Ban fireworks for the environment and because (GASP!) for the children. Where are the Liberal whiners on this issue? Could it be that...they like fireworks?

Comments:
You din't hear? Glen Beck was talking about some idiots in Californina(shocker) saying that the fireworks displays were "startling the birds."

I wasn't sure what this meant... perhaps it's related to enviomental Justice? Gotta ask Molson

I did not hear the "startling the birds" comment but I have no doubt that some treehugger said it. Thanks for the info, Arc.